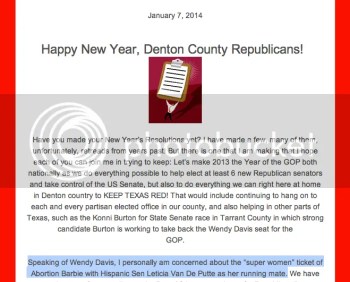 The Denton County Republican Party Chair Dianne Edmondson expressed her concern over “the super women ticket of Abortion Barbie with Hispanic Sen Leticia Van De Putte as her running mate.” The weekly newsletter sent Tuesday is the last before the party will host a forum Monday with every candidate in the Lt. Governor and Attorney General's race. Senator Wendy Davis is running for Governor against the current Attorney General Greg Abbott and Sen. Leticia Van De Putte is running for Lt. Governor.

The use of “Abortion Barbie” prompted the first real shakeup of the Governor's race after Greg Abbott thanked a supporter in a reply to a tweet that included the slur “Retard Barbie.” Abbott later tweeted: “FYI: I thank supporters on Twitter, but I don't endorse anyone's offense language. Stay positive.” The term was originally credited to Erik Erikson a prominent Conservative Republican and the editor-in-chief at RedState who the GOP often looks to for messaging and reinforcement. It is no surprise that the insult is still in circulation on right wing blogs, but it is shocking to see it from a countywide elected party official just days before a high profile event.

Ironically, in the very next sentence following the Barbie reference, Edmonds says, “We have our work cut out for us to dispute the Dems' false accusations of a Republican “war on women.” Generally speaking, using offensive and objectifying language to describe women is not considered persuasive outreach.

The same could be said about being concerned with the “Hispanic Sen Leticia Van De Putte.” Concerned maybe that Hispanics might show up to the polls? I hope that the candidates that are visiting the Denton County Republicans next week repudiate this kind disrespectful language towards women and Hispanics. Texas Democratic Party Communications Director Emmanuel Garcia said in an emailed statement, “Sadly, this is just more evidence on the Republican war on women and their “fantastic” Hispanic outreach program.”

State Rep. Poncho Nevarez (D-Eagle Pass) chimed in on Twitter, “I would say to those Hispanics already in GOP fold or those being wooed…..This is what they think of you.” To which Texas Monthly's Erica Grieder replied, “I genuinely don't understand why the many, many Rs who aren't dipshits don't call people out for this kind of thing.” Rep. Nevarez described the deafening silence as “go along get along bs,” adding that, “If you are Hispanic and understand the implicit msg you tell the GOP to stuff it. Enough is enough.” The conversation was capped by a poignant reminder by a frustrated Grieder, “the go along get along' mentality is fundamentally un-Texan.”

The Lt. Governor and Atty. General forum will include Q & A from the audience which will also participate in a straw poll following the event. Here are some questions they could expect:

“When will our party realize that using offensive and objectifying language to describe women is actually part of the “Republican War on Women?”

“How can the Republican Party dispute the War on Women with headlines from the Houston Chronicle like: New report gives Texas an “F-” on reproductive health and rights?”

“Will every candidate please roundly denounce the derogatory language used by the host of this forum?…Anyone?”