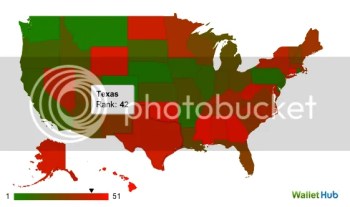 Texas has the largest carbon footprint of any state by far and now a new study shows that counter to intuition Texans are also paying more than most other American for their energy.

The cost of energy is higher for Texan's for the same reasons the state leads the nation in production of greenhouse gases — a lack of investment.

We haven't invested in transportation infrasture to reduce traffic congestion or programs that lower pollution and its long term health costs, on top of the fact that our state leaders actively deny climate change and fight any attempts by the federal government to mitigate the problem.

See what's going on below the jump…In its methodology WalletHub “used six key metrics to examine the various factors – from the price and consumption of residential electricity to the price of fuel at the pump and number of miles driven.”

The Texas GOP platform does address Climate Change and offers insight behind the paranoia it seems to incite on the right, 'Climate change' is a political agenda which attempts to control every aspect of our lives. We urge government at all levels to ignore any plea for money to fund global climate change or 'climate justice' initiatives.”

In the Texas Tribune's “Falling Behind” series they report the findings of climate scientists, even those from Texas universities, that show that Texas' nagging drought, hotter summers, and coastal erosion are all linked to climate change and that the state is passing up an enormous opportunity to be a leader on combatting such effects.

Unfortunately that is exactly what seems to be the choice of most politicians in this state, even against the wishes of scientists and health officials.

Texas has 3 major population centers on the American Lung Association list of most polluted cities — Houston, Dallas and my hometown of Beaumont-Port Arthur.

“Ignore clean air and it will go away,” read a roadside billboard from my childhood that I will never forget. Fastforward a couple decades and Exxon is mulling expanding it Beaumont refinery to be the biggest in the nation. The current largest is Motiva in…Port Arthur.

The Texas legislature isn't just agnostic when it comes to controlling pollution, it is down right hostile to almost any attempt to keep such toxins under control. Instead of accepting the responsibility of stewardship to the environment (including the human one), it seems to view fighting federal attempts at protecting air and water quality as a right of passage and proof of solidarity with the energy industry.

The conservative legislature has been more concerned with using budget diversions to appear to keep taxes low than it has preparing for the enormous growth that the state has seen. This has put a strain on what resources are supposed to be available increase air quality. The Texas Tribune reported in an article the challenges in Dallas-Fort Worth:

The Legislature had established a program in 2001 creating incentives for better pollution controls on vehicles – by far the biggest contributor to pollution and high ozone levels – but hundreds of millions of those dollars have instead been used to balance the state's budget.

One of the largest obstacles to cleaning up the air in Texas is partisan politics. Texas' Attorney General and the GOP's gubernatorial candidate Greg Abbott takes pride in suing the federal government and when the EPA issued rules trying to stop the spread of Texas based pollution to other states he issued an official response saying that, “the Obama Administration is determined to advance its liberal agenda despite the fact that the EPA's cross-state air pollution rule will jeopardize the reliability of the Texas electrical grid, threaten the jobs of hard-working Texans, and burden Texas families with higher electricity prices.”

He seems to be apathetic towards Texan's health, the quality of air that they breathe, and even cedes the entire issue of air quality as part of the “liberal agenda.” His rhetoric is also in direct contradiction to the findings of the study that show Texans already pay more for energy under our current system, even more than those “blue” states that voted for Obama and are willing to work with his administration.

Things could be different of the state took its responsibility serious. Bucking the federal government wouldn't be so bad if Texas actually picked up the slack and led the way on behalf of its citizens, but its agencies tasked with regulating industry and environmental quality have been little more than extensions of our governor's political philosophy and industry lapdogs.

In its most recent review of the Railroad Commission (Texas' oil and gas regulator), “the Sunset Commission concluded having a more transparent and objective regulator was more important than ever.”

TCEQ has created from whole cloth a bizarre method to forgive penalties that should be assessed against the major polluters who carry equal responsibility for the poor air quality that led to the imposition of those penalties in the first place by not spending money that residents of our region have been paying in order to clean up our air. We should all, in short, be completely outraged by this sleight of hand.

Texas statewide political leaders from Rick Perry to the man who wants to replace him take climate denial from a hobby to evangelism, and both the science and the math say it will cost the state dearly in the long run.