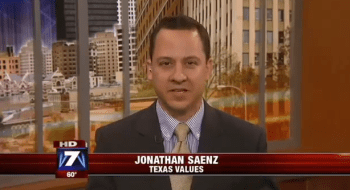 Might have missed the memo on this one. But, according to Texas Values President Jonathan Saenz, gay people aren't really out seeking equal rights — they're out for vengeance.

Texas Republicans' favorite pal and go-to anti-gay organization leader stopped by for an interview with Raging Elephants Radio last week, and reminded us just why conservatives turn to him whenever they need someone to trash gay people.

When discussing a story of a Denver bakery losing a non-discrimination case for refusing to bake a cake for a gay couple, radio host Claver Kamau-Imani suggested this obviously meant the future imprisonment of Christians to concentration camps. Saenz agreed, and added this has been the gays' real agenda all along — “to put people in jail that disagree with homosexual marriage,” or their now super trendy “homosexual lifestyle.”

Take a listen below the jump. Transcript of remarks included.

Transcript of remarks (bold emphasis mine):

KANAU-IMANI: Alright, let's get back to Colorado. So you have a baker that does wedding cakes and they say they don't want to do a two-man wedding cake or a two-woman wedding cake with the little figurines on top or whatever. And so the homosexual couple, whether it's man and man, woman and woman, whatever, they go to this specially created commission to deal with this, file a complaint against the business, and so the commission says 'No, you're gonna make this cake, plus, you're going to go to concentration camp,' essentially. Is that what you're telling us, Jonathan?

SAENZ: That's right, that's right. You know, they tried to do something like that here in Texas – I think it was a bill by Sen. Rodney Ellis that dealt with hate crime stuff, where they would've forced you to participate in an event of the quote-unquote community that you had offended. And so we testified against this legislation and it ended up dying on the Senate side. But I mean, this is what they want. I mean, there's no question. I've seen it. I've seen them try to do it with legislation here in Texas at the state level. It is a goal of theirs to put people in jail that disagree with homosexual marriage, without question – or the homosexual lifestyle.

Interesting that Saenz mentioned Sen. Rodney Ellis' hate-crime bill, and adamantly refusing to establish any friendship or bond with the LGBT community. Clearly, the guy doesn't know anything about LGBT folks. If he did, he'd know there's no such thing as a gay agenda. And, perhaps then, he wouldn't be so paranoid that gay people are out to get him.

Seems like Saenz spends a lot more time thinking about gay people, than gay people do about him.