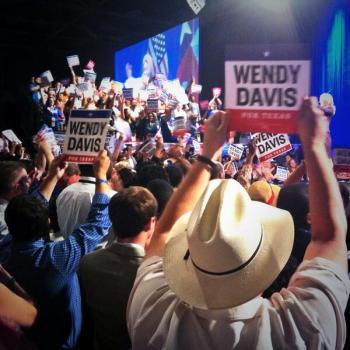 It's hard to overstate the energy of the delegates at the 2014 Texas Democratic Party State Convention.

It's also hard to overstate how diverse the crowd is, in terms of age, race, socio-economic status, geography, and life experience. We say we're the Big Tent party, and that is made clear in the crowds of people moving through the Dallas convention center.

Despite reports of a loss of enthusiasm, the crowds here still revere Wendy Davis for her 13-hour stand for basic rights, and we love Leticia Van de Putte like she's our favorite aunt or best friend.

And while those two leading ladies are at the top of the ticket, the Democrats we've got running further on down the ballot are pretty impressive, too.

Read our coverage of last night's speeches and best one-liners below the jump.Last night, the Texas Democratic Party presented an all-star lineup of speakers that represented the best of our party, the great successes of Democrats here in Dallas County, and the future of our party and our Texas electorate.

But before that, a broad range of candidates visited issue and identity caucuses, spoke at their own Senate District caucuses, and greeted delegates around the convention center. We have an impressive slate of candidates, from the legislature to Congress to statewide office — even candidates in rough, uphill battles seem more polished and prepared, and excited about the difficult task they face than previous election cycles.

But it was the speaker lineup last night that brought down the house, as Democrats built up their energy awaiting our heroes, Senators Leticia Van de Putte, and Wendy Davis, who formally accepted the nomination to be the next governor of the great state of Texas.

We live-tweeted the event last night on Twitter at @BOR, and here are some highlights.

Senator Royce West, the convention chair, welcomed us to his city and brought out the Dallas County delegation of Democratic elected officials. Democrats hold every countywide office in Dallas and the majority of Commissioner and JP seats as well.

The Dallas County Democratic Party has worked hard to turn the county blue and keep it blue, even in the 2010 cycle. That work was evident last night with the overwhelming and diverse slate of candidates standing on the stage last night.

"Every countywide elected official in Dallas is a Democrat!" Senator Royce West shows off the home team. #TDP14 pic.twitter.com/F5jvkZEoGg

Houston Mayor Annise Parker led a veritable convention-wide messaging workshop as she articulated why she's a Democrat and encouraged all of us to speak more frequently and openly about why our Texas values are Democratic values, and why Democratic values are Texas values. She was warmly received and gave a great speech, and definitely needs to be a future statewide candidate.

We heard from State Rep. Sylvester Turner and Railroad Commissioner candidate Steve Brown, before San Antonio's star Congressman Joaquin Castro came out to speak at length and broadly about what is at stake in taking back our state for the Democratic Party, and by extension the people of Texas.

"I wish you could see what I see." @JoaquinCastrotx on the diversity and number of #TDP14 delegates pic.twitter.com/Zk95ZZZFXr

He was also pretty damn funny.

"Politics should be more like sports. Don't you want to trade Ted Cruz for Elizabeth Warren?!" @JoaquinCastrotx pic.twitter.com/pEJxWFCKPP

The line was a reminder of how rapidly national public opinion has shifted to embrace LGBT equality. Only 6 years ago, the DNC convention was hesitant to substantively engage on the issue. Now, Democrats are proud to feature LGBT citizens, support marriage equality, and push for non-discrimination legislation at our highest profile and most public party events. We definitely can't say the same for the Republicans.

State Representative Trey Martinez Fischer, a force in the Democratic caucus and the sponsor of the evening's biggest party, later that night, was also given a prime slot to introduce himself to the wider Democratic delegation. While he is well known in San Antonio and to legislature watchers, this convention is clearly an opportunity for TMF to raise his profile.

Known as a fighter both procedurally and temperamentally, TMF also wasted no time in going after the Republicans and their failed policies for Texas.

He spoke at length about his background, and how education and his public school teachers in particular were such a tremendous force in inspiring him to fight for the little guy. It was a great speech, and came from the heart, especially when he thanked his wife for her shared commitment to public service.

"What time is it?" "TIME TO FIGHT FOR TEXAS!" #TDP14 pic.twitter.com/lKa3mJuiKe

Our Travis County Democrats also had a few moments in the spotlight. AISD board member Gina Hinojosa — daughter of TDP Chairman Gilberto Hinojosa — spoke about cuts to education and launched a fundraising push that, if successful, will result in the chairman shaving his iconic mustache.

State Representative Donna Howard also spoke about the all-out assault by Republicans on women's health and well-being, before introducing Senator Kirk Watson, who spoke at length about the need to have an honest conversation about education funding. Our state is clearly failing to uphold its basic mission to provide all of our children with a quality education that prepares them to compete in the modern economy.

By then, delegates were ready for the main event: Wendy & Leticia!

Leticia's speech was preceded by a hilarious video of her and her family, talking about her decision to run and the issues that impact the San Miguel – Van de Putte clan and every other Texas family. She entered the arena by walking through the delegation, further reaching out to the voters that have embraced her tightly throughout this campaign cycle.

"I know what needs to be done and I am the right person for the job!" @leticiavdp #TDP14 pic.twitter.com/ptVZlU6avZ

Her speech carried on that theme, touching on her parents' commitment to public service and emphasizing the extremism represented by her opponent, Dan Patrick. It was a great speech, and she delivered it with the same fervor one might expect if they were talking about the issues with Leticia around her family table.

At last, Wendy Davis took the stage. The crowd pushed in and hung on every word, as she articulated the clear contrasts between Greg Abbott's cronyism as the insider's insider, and her own roots as a hard-working Texan.

Her speech was solid. There are clear policy contrasts between Davis and Abbott, contrasts which her press team has been pushing out on a daily basis and which were reaffirmed throughout the speech.

"Greg Abbott is just another insider working for other insiders." @WendyDavisTexas #TDP14 pic.twitter.com/UJ9h1Cxdbm

Abbott is the political crony's fever dream, an insider's insider who takes advantage of our state's de facto one party system to exploit, cheat, and milk the system for his political benefit and the financial gain of his donors.

He fired whistleblowers who refused his attempts to coerce them, uses state funds to reward his donors, and refuses to settle a lawsuit brought by the school districts who cannot subsist on the insufficient funding provided by the legislature. He claims that he wakes up, sues Obama, and goes home, but in between he has managed to do a whole heck of a lot of harm to the people of Texas.

"We don't iron the pants anymore, we wear them!" @WendyDavisTexas #TDP14 pic.twitter.com/qQfrl2ea9D

Watching the crowd, I saw the same wide-eyed enthusiasm and unshakeable support that Wendy inspired last summer among the thousands who came to stand with her at the Capitol.

To say that Democrats lack enthusiasm and that our fire is diminished is to ignore the enthusiasm on the floor last night and throughout these halls, as thousands stayed on the floor to listen to the woman who stood up and made us remember that if we — when we stand up for our values, we can and will win.

The next governor of the great state of Texas, @WendyDavisTexas! #TDP14 pic.twitter.com/WBbNQt0ALK