I didn’t go to the Capitol last summer to see Wendy. I went because I attended Texas public school and received my sexual health education in a crowded gym class from the 55-year-old man who coached my high school’s baseball team. I passed the sex unit in health class by making a Powerpoint on how you can get gonorrhea in your eyeballs. When I started having sex before I turned 18, I researched the most convenient route to an abortion clinic that didn’t require parental consent (my plan involved a flight to New York). The summer before I turned 21, the Legislature barred Planned Parenthood from using Women’s Health Program funds, which had paid for my birth control pills since high school. In 2013, I went to the Capitol because I was pissed.

The time I spent under the dome last year was life-changing, empowering, and emotional, but it certainly wasn’t glamorous. Mostly I yelled and crowded around strangers with laptops and carried pizzas across the Capitol—pizzas sent from San Antonio, Dallas, New Orleans, Washington, Wyoming, from people watching us from their computer screens and Twitter feeds. During the final emergency session, I was dragged out of the Capitol by five armed men and one armed woman in DPS uniforms after a woman in a blue shirt told them that I left the gallery line to go to the restroom.

The officers wrote down my name and driver’s license number and told me not to come back. I biked home, shocked and reeling. An hour later, I biked back.

Two days before the filibuster, I sat in the gallery of the Texas House of Representatives as my lawmakers deliberated the House bill that mirrored SB 5. Like most of the orange-clad protestors surrounding me, I strained to understand fragments of a debate thick with procedural vocabulary and bureaucratic orders. I watched representatives kick up their feet on their desks and banter with their colleagues while we were threatened with ejection if we leaned on the handrail. That day, the crowd was smaller and calmer: Our anger was discernible, but still ripening. The clock had not yet run out.

But at one point in the afternoon, an outburst occurred—a harbinger, perhaps, of that Tuesday night. During Representative Jessica Farrar’s testimony, she claimed that she had never seen such disrespect from legislators toward citizens. Referencing the rushed debate of the special session, she inquired, “If these bills are an emergency, why doesn’t the medical community support them?” She called for our representatives to stop gambling away women’s rights in exchange for a midterm re-election and to listen to the women who came to represent themselves. 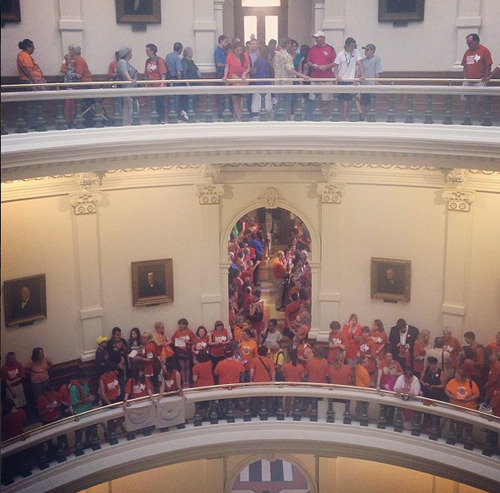 When she sat down, the silent jazz hands we were permitted to use were not enough to express our emotional response to her speech. One person started clapping, and then more. Wary of getting kicked out of the gallery, I joined in reluctantly, and soon the entire crowd was on their feet, cheering. The applause persisted for a few minutes—long enough to show these lawmakers that women matter, and women will be heard, and women will not remain politically invisible.

On the night of the filibuster, when Sen. Wendy Davis was silenced for the third time, a surge of outrage that could not be suppressed by a man in a suit with a gavel filled the building. Police officers were dispatched throughout the Capitol to subdue the uproar, but most everyone ignored them. What brought us there, what kept us there, and what made us raise our voices even when we were threatened with arrest was the emotional solidarity of shaking off the ossified restraints of an inoperative hierarchy. We were unified in one common cause, and we were winning.

***
We won because we were resolute, even when it meant being tactless. I am eternally grateful to Wendy Davis and Leticia Van de Putte and Donna Howard and Kirk Watson and Mary Gonzalez and Jessica Farrar and Senfronia Thompson and all of the other strong, feminist elected leaders who defended us. But ultimately, the filibuster succeeded because of the citizens and grassroots activists who showed up in droves. When procedures for influencing policymaking failed us, we changed the rules.

If we want to continue to win, we must continue to raise our voices. That means voting out politicians who are anti-choice, anti-people of color, anti-education, anti-healthcare, anti-women, anti-social services, anti-fair pay. It means rolling back these laws and funding abortions and birth control. It means teaching comprehensive sex ed to every student in Texas—what sex is, what sex does, how to prevent STIs and pregnancy, and perhaps most importantly, what consent does and does not look like.

It’s time to stoke our collective, righteous outrage. In the past year, Texas women have been forced to cross state (and country) borders, pawn their belongings, and visit illegal flea markets to obtain a basic procedure that is protected by federal law. In September, when all clinics that are not outfitted ambulatory surgical centers must close, Texas women will have even fewer options. They will die of septic shock from botched abortions. They will be driven further into poverty by unplanned pregnancies.

This fight isn’t over yet, and we will not yield at this time.