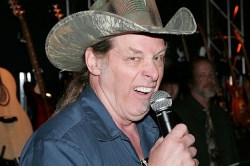 On Tuesday, Greg Abbott will proudly appear with a man who defecated in his pants for a week to avoid serving in the army and who recently called President Obama a “subhuman mongrel”. Nugent will be a centerpiece of Abbott's early vote push. “According to an itinerary put out by the Texas Eagle Forum, Nugent will join Abbott in Denton at 11 am at El Guapo's and again at 2:45 pm at Wichita Falls' 8th Street Coffee House,” the Dallas Morning News reports.

Though Abbott's early vote push is purely symbolic (he's got the Republican nomination locked up), the choice to associate himself with Ted Nugent has a lot of meaning.

Nugent, who is now the treasurer and co-chair of Republican Sid Miller's agriculture commissioner campaign, will forever be a media darling because he just says so many horrific things. One more reminder: he invited President Obama to “suck on” his machine gun.

Unfortunately, Ted Nugent is cozy under the collective wing of Texas Republicans. He's been invited to get involved with them for years — from his (Confederate flag-clad) appearance at Rick Perry's 2007 inauguration to Steve Stockman's bringing Nugent to last year's State of the Union to being welcomed onto Greg Abbott's campaign effort this week.

It's pungently unacceptable, when you really think about it.