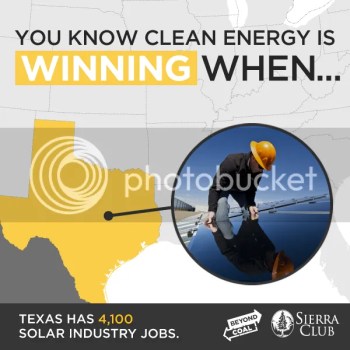 Today a press conference was held at Austin City Hall with Councilwoman Laura Morrison, the Sierra Club and it's Beyond Coal campaign to unveil a new study of solar jobs and to promote utility-scale solar projects throughout Texas. The study by The Solar Foundation, shows that Texas now ranks 6th in total jobs in the solar industry. That marks a 28% increase in just one year and represents a total of over 4,100 jobs. Texas also ranks number 1 in solar potential, and according to the Solar Energy Industry Association, “If you include all the usable land (not just rooftops) in Texas, you'll have twice the solar potential of any other state.”

“Falling solar prices combined with enormous solar resources will make Texas a huge solar market. With some smart policy, jobs in the solar industry could easily double or triple in the next three to five years,” said David Dixon, Chief Operating Officer for Native Inc. Native has worked with the Lone Star Chapter of the Sierra Club to bring rooftop solar to residents across the state.

Find out what more is and can be done below the jump…The Texas legislature has lagged behind other states in offering incentives so it's been the state's largest municipal electric utilities that have led the way in solar production. In fact San Antonio and Austin account for about 85% of the state's solar capacity.

“We want to see these figures increase, and we're counting on municipal utilities like Austin Energy to lead the way by expanding job-creating solar policies,” said Dave Cortez, organizing representative for the Sierra Club Beyond Coal Campaign in Central Texas. According to Cyrus Reed, conservation director with the Lone Star Chapter of the Sierra Club, one important step for Austin, is to double its solar goal which he says Austin City Council has instructed Austin Energy to do. Councilwoman Morrison echoed the sentiments that more local solar meant more local jobs saying that a $30 million investment could spur $300 million in economic benefit.

Major projects to expand solar in Texas include a plan by CPS Energy, San Antonio's municipally owned utility, to have 400 megawatts of utility-scale solar constructed by 2017. That is projected to power about 10% of San Antonio area homes. In 2014 Texas will see two private solar projects come online, one in Pecos County and one near Lubbock. Organizers of the press event say that a variety of utility-scale projects are being planned across Texas through 2016.

You can see the full study by The Solar Foundation here.