UPDATED This post has been updated as of 11:45am to include the response of Mayor Parker to attacks on her marriage. 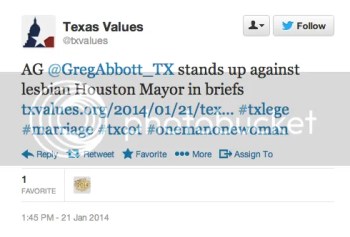 When I read the tweet, “@TxValues: AG @GregAbbott_TX stands up against lesbian Houston Mayor in briefs,” the first thing I thought was, “put some pants on Greg!” But, of course there is so much more wrong with this. It clearly uses the term “lesbian” as a pejorative, otherwise Texas Values would have referred to, “heterosexual AG Greg Abbott,” or simply and respectfully referred to Parker as Mayor.

Marriage equality has made tremendous progress in the past year and it, dare I say, threatens to come to Texas. Abbott hasn't had the best of luck in the courtroom lately against the federal government, so this time he is arguing that it doesn't even have jurisdiction to hear these cases.

Mayor Parker has pushed for the City of Houston to recognize legal same-sex marriages performed in other states for purposes of spousal benefits. Suggesting she did this simply because she is “an open lesbian,” is not only crude but ignores the fact that most Texans support, by a large margin, extending benefits to same-sex partners of government employees. According to a poll taken last year by Equality Texas, “65.7% of voters support extending domestic partnership benefits to government/public university employees; an increase of 3.4%” over a similar poll taken in 2010. The poll also found a 5.2% increase in support for full marriage equality; transforming a 52% majority against into a 47.9% plurality for.

Abbott is also currently defending the state's budget cuts against 2/3rds of Texas' school districts. He fights hard and uses the bully pulpit when easy political points are there to be scored but when the heat turns up, it boils down to no comment. He recently told Texas Tribune that he would refrain from weighing in on a right to life issue because it was going to litigation. Isn't that what happens to most controversial issues? Yes, our Attorney General, the state's top lawyer doesn't want to comment on issues that are going to litigation unless of course it's Obamacare, or perhap gay marriage.

Opposing marriage equality will prove to be a loser for the party that prides itself on defending Liberty without choice and the freedom to live without the freedom to love. Texas Values claims to work towards ensuring, “Texas is a state in which religious liberty flourishes, families prosper, and every human life is valued.” But, supporting family values will always be an unfulfilled promise until the value of all Texas families are recognized.

The struggle of gays, lesbians and transgendered Texans is playing a big role in the Republican primary, particularly in Houston, and a quarter of all votes in the state are expected to come from Harris County. Sen. Dan Patrick (R-Houston) vying for Lt. Governor seat took shots at his mayor saying that her marriage in the Golden State was part of a strategy to turn Texas into California. That's funny since many people associate a preoccupation with opposing homosexual rights with, a certain insecurity. Is it too much to point out that Texas Values defines marriage not as just a union between one man and one women, but, “a lifelong union of one man and one woman?” It is part of their, “stand for biblical, Judeo-Christian values,” and that alone should give pause for reflection to at least one overly critical Senator.

Mayor parker responded to the attacks on her personal life by saying, “You don't commit 23 years of your life to someone to make a political statement.” True, but Patrick and others don't mind using it themselves to make one.

“Dan Patrick's running a political campaign,” she continued. “And he wants to make the gay community a whipping boy in that political campaign. And he thought I was an appropriate target. He doesn't know what he's talking about. And I don't think that's unusual.” She concluded saying that they, “can get over it.”

Not everyone in Houston's GOP delegation believes the LGBT community is less equal. Rep. Sarah Davis just received Equality Texas' first ever endorsement of a Republican candidate. “The majority of Republicans agree with most of our legislative priorities,” said Texas Equity PAC volunteer Daniel Williams in an article by Lone Star Q. “We have to make it safe for Republican representatives to be out front on those issues.”

Out front for equality and freedom for everyone, not hiding behind a stone they are metaphorically and perhaps biblically barred from throwing. Speaking of bibles, of the 1,000 interviewed in the Equality Texas poll over 80% identified as Christian, and 25% were from greater Houston. Perhaps more GOP candidates can find it in their heart to allow freedom for others to exercise their right to life, liberty and the pursuit of happiness.