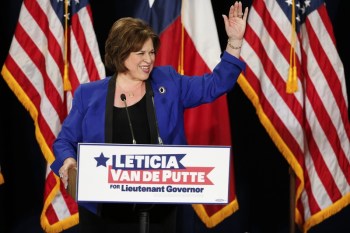 When State Senator Leticia Van de Putte announced her candidacy for Lieutenant Governor this past Saturday, there were a few points she wanted to make clear. Firstly, she defined herself as a mother and a grandmother. Second, she drew a clear distinction between her candidacy and platform and that of the Republican candidates who are currently engaged in a fight for primary votes. And lastly, that Texans deserve better than what we've been getting – we deserve a Lieutenant Governor like Leticia Van de Putte.

Van de Putte drew on her twenty-two year history in the State Legislature to speak with authority on issues facing our veterans, our public education system, women, and families in Texas. She spoke about issues facing the Texans that our current leadership has “forgotten,” and emphasized her opponents' focus on winning the votes of the most extreme Republicans in the upcoming primary.

More on Senator Van de Putte's speech below the jump.Senator Van de Putte shared the story of the family meeting when her family discussed her first run for office. When her younger daughter asked why she was running, her daughter Nichole said, “Because there's not enough mommies there!” This set up one of Van de Putte's best lines in explaining why she chose to run: “Mama's not happy.” Van de Putte is a mother and a grandmother, a fact she brought up repeatedly throughout her speech. Her grandchildren are the reason she “has to” run. And it isn't only her family – she's running for everyone's grandchildren. She has to run because they are the future of Texas.

Van de Putte's “Mama's not happy” isn't just about her family, its about looking out for all Texas families. As Republicans try to define Van de Putte as out of touch or too liberal for the position, she is positioning herself as the trustworthy matriarch – the woman you can trust to look out for your family, your grandkids, like they were her own. And she knows that your family deserves better than what it's been getting.

And have you been paying attention to the Republican primary race for Lieutenant Governor? It gets wackier every day. They're all trying to out-extremist each other. All four of them chasing the most extreme 5% of Texans who control the Republican primary elections. And, to them, the rest of Texas just doesn't exist. And that, my friends, is a problem.

Van de Putte's speech named her opponents as the ones who are out of touch with the majority of Texans. “While they bicker among themselves,” Van de Putte said, “funding for our neighborhood public schools has been cut by the billions, class sizes have swelled, and too often we've lost our best teachers.” Because the current leadership does not understand how to invest, and refuses to invest in public education, Van de Putte said, Texas has fallen far behind.

On transportation,”They've even talked about taking paved highways and turning them into gravel roads. As if they think you can grow a 21st century economy on 19th century transportation system,” Van de Putte said. When they failed to expand Medicaid, it meant that “65,000 veterans will be left without affordable healthcare.” It will also cost jobs and revenue that would have “bolstered and flowed right into our Texas economy.” On immigration, “they continue to be too afraid of their own primary voters to provide any leadership whatsoever to pass meaningful immigration reform.”

After this blistering assessment of the GOP's failures to deliver the kind of leadership Texans deserve, Van de Putte called attention to the belittling tactics Republicans have already turned in her direction:

This theme, that she is the real deal that understands what the average Texan is going through, who has fought and will continue to fight for Texan families, unlike her Republican opponents, is the most powerful takeaway from her twenty-five minute speech. The speech itself is full of excellent soundbites and quotes on everything from immigration to women's rights to transportation, but they all come back to the same point: her opponents are the same people who are responsible for where we find ourselves today. Throughout the speech, Van de Putte asked, “Doesn't Texas deserve better?”

Though Van de Putte does not have same level of recent exposure as Senator Wendy Davis, her speech announcing her candidacy leaves no doubt that she knows what she needs to do if she is going to win. The senator we all heard demanding her right to speak on the Senate floor brought that same willingness to call Republican leadership as she sees it to her candidacy on the 2014 statewide ticket. Leticia Van de Putte is a mother, a seasoned legislator, and a force to be reckoned with.