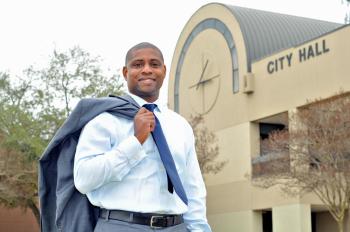 In a Burnt Orange Report exclusive, we can report that former Fort Bend County Democratic Party Chairman, Stephen Brown is considering a bid for Texas Railroad Commissioner in 2014.

In our exclusive interview, Mr. Brown spoke with me about his political history, including having served in the Clinton White House and how he was elected as chair of the Fort Bend County Democratic Party in 2010. He resigned the Chairmanship earlier this year when he began considering a run for elected office. He stated that he wanted to run for Texas Railroad Commissioner because the Commission needs an advocate for regular Texans while making sure people who are doing the right things in regards to oil and gas production are not being punished.

Mr. Brown stated his preference to see the Commission change its name to reflect that it is a regulatory commission over the energy sector, and not railroads. He also stated his desire to see stronger ethics rules implemented over the Commissioners. When asked about Republicans who cited federal oversight was a job killer, Mr. Brown responded that people who used that excuse were not being creative when it came to finding solutions. He pointed out again that one of the roles of a Commissioner is to punish bad actors who violate laws, not to give everyone a free pass.

Stephen Brown has been a great advocate for the Texas Democratic Party as Fort Bend County's Chairman and served the Party with distinction and honor.

Listen to my interview with Stephen Brown after the jump!