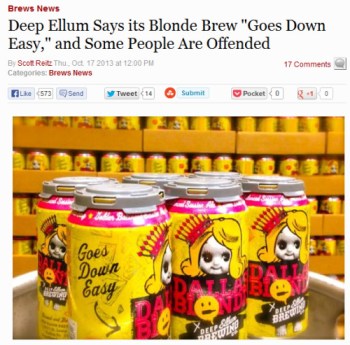 Last week, Deep Ellum Brewery (a craft brewery in Dallas) revealed their new van for their blonde ale, Dallas Blonde. The hot pink, eye catching van sported the tagline, “Goes Down Easy.” In a post last Friday here on Burnt Orange Report, I addressed the issues I saw with this advertising.

I drew a connection between this van, the tagline and the concept of rape culture. The post was featured on Eater Dallas and Scott Reitz over at the Dallas Observer asked Deep Ellum for their perspective on these critiques. “We're not saying that all blondes go down easy,” the brewery stated.

More from Scott Reitz, DEBC, and on the rocky relationship between ladies and their beer below the jump.Though the piece sparked many responses, including a few angry tweets, the point of view embodied by Reitz' piece and the response from John Reardon, the owner of Deep Ellum, is a huge part of the problem when trying to address issues of sexism in advertising – especially when it comes to areas so often assumed to belong to the boys' club.

Reitz describes Deep Ellum's beers as “aggressive” not once but twice in the first two paragraphs. This shocking advertising, the reader is then meant to understand,just fits with the brewery's profile. Further, the relative smoothness of the blonde ale in comparison to the other “aggressive” brews suggests that the tagline “Goes Down Easy” really is just about the beer.

Reardon and I made a similar point in talking to Reitz. We both brought up the prevalence of objectifying women in advertising for alcohol. For Reardon, this is a defense of his company's decision, as opposed to evidence that this is a real problem that needs to be critiqued and addressed.

The piece also assumes that the tagline becomes problematic in the context of a large van and an explicitly gendered beer. This is far from the point. The problem simply becomes more difficult to ignore when it is many feet high and driving down the street.

Both Reardon and Reitz seemed to think that naming this tagline as an example of rape culture took it a little too far. But, the point of the concept of rape culture is to examine the parts of our culture that play in to the continuing incidence of sexual assault. One aspect of this is the reinforcement of men's entitlement to women's bodies and their attention. Whether it is Belvedere saying that their vodka is better than women because it “always goes down easy,” a bar in Brooklyn proclaiming that all beer is better than women for the same reason, or a Texan craft brewery attempting to sell you their blonde ale by asserting that at least this blonde will “go down easy,” we are all supposed to be in on this little inside joke. When those pesky ladies exercise their right not to want to engage in sexual activity, at least you can count on your beer.

Reardon was not completely closed off to the idea that something might need to be done. “If there are women out there who are offended,” he told Reitz, “then we should apologize.” To determine whether any women were, in fact, offended, Reardon said the brewery would post a survey on its blog. As of now, no such survey has materialized.

The attitude I encountered in this response and others was incredibly familiar. “Some” women, Reitz and Reardon acknowledge, might be “offended” by this playful marketing ploy. If it is only “some” women who are simply “offended,” as opposed to craft beer consumers expressing a specific, well-founded critique of the decisions made by the brewery in marketing their product, then it is much easier to dismiss.

When the bloggers over at Bitch Beer brought up the objectification of women in advertising by craft breweries, the response to their detailed and well-researched argument was not much better. Lady beer drinkers just need to lighten up, OK?

As the craft beer industry continues to grow in Texas, breweries have an opportunity to create a craft beer culture that enthusiastically welcomes women as enlightened consumers of their products. Or, they could continue to follow Reardon's example and just do what everybody else has already done. That choice is up to them. Luckily, consumers of craft beer also have a choice: to pick another, better, beer.