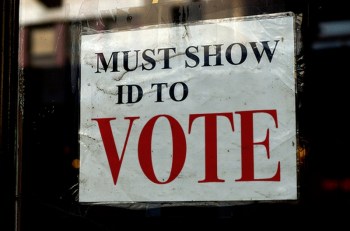 As we head into the first major election since the voter ID bill passed, there is predictable confusion surrounding what you need to bring to the polls in order to vote in Texas. But don't worry – State Senator Leticia Van de Putte (Bexar County) has you covered.

Read her recap of what's required, what your rights are and other useful information below the jump.

In the 2011 Legislative Session, a law was passed requiring voters to present a photo ID before being allowed to cast a ballot. I opposed this law – while most of us may take having a photo ID for granted, the U.S. Department of Justice estimates around 600,000 to 800,000 registered voters in Texas lack a DPS-issued identification. For many, obtaining photo ID may be a real hardship, either financially or physically. The poor, elderly, people with disabilities, women, and racial minorities are all more likely than others to not possess an ID.

I'm not going to re-fight those arguments here. For now, Voter ID is state law, so I want you to know how to comply with it so you can exercise your right to vote.

These forms of ID are acceptable at the voting booth:

With the exception of the U.S. citizenship certificate, the identification must be current or have expired no more than 60 days before being presented at the polling place.

Note that first form of ID on the list – Election Identification Certificate (EIC). That's new, created by the legislature for people who don't have any of the other forms, so they may comply with this law. (If you already have one of the other IDs, you are not eligible for an EIC.)

EICs are available from DPS driver license offices during regular business hours, on Saturdays at select locations, and at EIC mobile stations traveling throughout the state.

The Saturday hours and mobile stations will be available only for processing EICs. There are five offices in Bexar County:

Voters with a disability may apply for a permanent exemption from the law. For information on these exemptions and exceptions, call the Bexar County Voter Registration office at 210-335-6625.

Now, here's the really important part: When you go to vote, CAST A VOTE, NO MATTER WHAT! Here is why:

Perhaps an election official will tell you that you don't have the proper form of ID, or the name on your ID does not match the name on the voter registration rolls. This is especially a problem for women, who may have just gotten married or divorced or use another name for professional reasons.

Or maybe you have a religious objection to being photographed, or perhaps you lost your ID due to a natural disaster (as declared by the president or governor).

In all these cases or any other where your eligibility to vote is disputed, you may cast a provisional ballot. You then must appear at the voter registrar's office within six days of the election and sign an affidavit swearing to your eligibility or to these exceptions in order for your vote to be counted.

Please, if you are registered to vote, don't let anything stop you from exercising your right to do so. Many brave men and women in our armed forces fought to keep our  for our democracy intact- don't let them down.