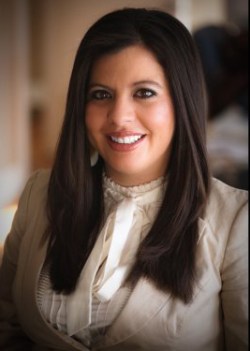 At age 29, State Representative Mary E. Gonzalez (D-Clint) is one of the youngest members currently serving in the Texas House of Representatives. Her age and freshman status, however, have not prevented her from setting out and creating big accomplishments for her district in El Paso County — emerging from this 83rd Legislative Session having successfully passed four of her bills and selected as the Mexican American Legislative Caucus freshman of the year.

Gonzalez has dedicated her life to promoting social change through community engagement, professional experiences and a strong academic background. She was selected to serve House District 75 already as a Capitol Veteran, having worked at the Texas State Capitol for three previous sessions in 2003, 2005 and 2007.

If you're in Austin, you can meet Mary and help her become re-elected by attending her fundraiser with Annie's List today at the Headliners Club.

Read more about Mary's work and projects below the jump.In an earlier interview with Austin American-Statesman, Mary was described as the Miss Congeniality of the class of 2013, forging relationships across party lines and having the ability to become one of the boys without becoming one of the boys.

“It's been a lot of hard work to go to 149 members to get them to go beyond their projections, beyond their stereotypes, beyond the stigma and beyond the boxes,” Gonzalez said. “Hey, I'm getting a Ph.D. Hey, I grew up on a farm. Hey, I am so much more than the one thing, the only thing that people want to write about.”

Having announced to the Dallas Voice that she was actually pansexual, Gonzalez is Texas' and the country's first elected official who identifies as such. She explained that gender isn't binary but a spectrum, and that authenticity is important to her.

Gonzalez was one of the seventeen House and Senate members featured in the Texas Legislature's “It Gets Better” videos, along with Wendy Davis, Mark Strama, Kirk Watson, and Leticia Van de Putte. The project aims to give hope to LGBT youth suffering from gay bullying that life for them can become better if they remain alive and do not commit suicide.

Gonzalez arrived well experienced in the ways of the Legislature, having worked for State Representative Richard Raymond during the 2003 session, State Sen. Mario Gallegos in 2005 and State Rep. Paul Moreno in 2007. Gonzalez has not only served as a voice for the LGBT community but for all members of her hometown, having focused mostly on more targeted legislation for her district.

She went in knowing how to get things done and her success this session proves this.

“We were able to get wastewater service to three colonias, sewerage to over 1,000 families in my district,” Gonzalez said of the impoverished neighborhoods. “That's amazing. No one is ever going to write about that, but I know what it means.”

Gonzalez was a strong voice against the anti-abortion bills passed this summer by Republicans. Wendy's filibuster success — if only temporary given the 2nd special session — could not have happened without the bill first being stalled in the House, which was delayed primarily by Gonzalez and Representatives Jessica Farrar, Senfronia Thompson, Dawnna Dukes and Alma Allen.

Among the women that will be most heavily impacted by the anti-abortion legislation will be women of color and women living in rural communities, crucial points Gonzalez fought hard to include in the debate.

Gonzalez is one of only four openly LGBT candidates running for the House, including two openly gay Republicans. Her strong voice and positions have already garnered her two possible primary challengers.

You can learn more about Mary and make donations to her campaign by visiting her site, Vote Mary Gonzalez.