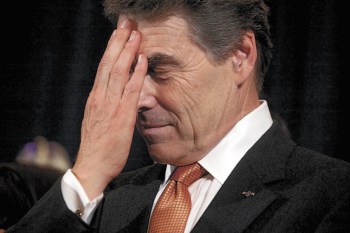 Rick Perry has spent the last several months traveling around the country ginning up his name ID and and trying to poach jobs in advance of his next failed Presidential campaign.

Maybe he's hoping that folks in other states will forget what an embarrassment he was during his last effort to capture GOP nomination. Fortunately, his record of failure is following him on his latest trip to Maryland.

Texans for America's Future PAC is running a radio ad that sets the record straight on Perry's record as Governor and his so-called “Texas Miracle” — last in high school graduation rates, last in population with health insurance, and now our state's too broke to fix our roads!

The ad will run on Maryland talk radio stations WNAV and WCBM.

Listen to the ad below the jump.Here's the ad:

“When last you saw Rick Perry, he was on national TV, forgetting which three federal agencies he would eliminate if he were president. Fortunately, voters eliminated him. But now he's back! Rick's running ads saying, 'Maryland folks, come to Texas—-It's Disney World for corporate CEOs!'

But Rick's a little forgetful. And here's what he forgot this time. In Rick Perry's Texas:  One child in four lives in poverty. And thanks to Perry's bad budgeting, the highway department has to convert some modern paved state roads back to gravel.

Texas ranks dead last in the percent of population that graduates from high school. But we're Number One in the production of hazardous wastes, and a strong fourth in cancer causing chemicals released into the air. If that makes you sick, too bad. 28% of Texans have no health insurance at all—nada, zilch, none—  …and we're rated the worst in the nation in health care services.

The trouble is, Rick's failed leadership is making these problems worse. The state of Perry will be great for business, all right, unless you like paved roads, an educated work force and air you want to breathe.

Paid for by Texans for America's Future.”

For more Perry vs. Maryland action, you can watch Rick Perry debate Maryland Governor Martin O'Malley on Crossfire tonight at 5:30 p.m. If you're in the Houston area, you can join the Harris County Democratic Party headquarters and watch it together!