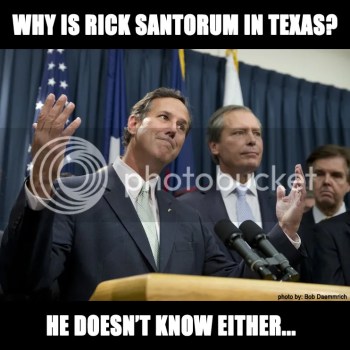 Rick Santorum was in Texas Wednesday to “let the light shine” on the abortion issue, but he seemed a bit confused. He straddled the dual narrative Texas Republicans have been juggling, that this “pro-life” bill is actually about “protecting women” and not ending abortion. He said it was the Democrats who held an “extreme point of view by any stretch of the imagination,” but that the Republicans pushing this bill were the “courageous individuals” for “doing things that [are]not politically popular.”

I think what he meant to say is, this issue is very popular in the Republican primary and by being “pro-life” he means until birth do thy part. The Burnt Orange Report and others have reported the fact that the bill's author rejected an exception for rape or incest, which by all accounts is the extreme position. What is not in line with the “protecting women”/reducing fetal pain rhetoric is that Republicans tabled several amendments that would have prevented unwanted pregnancies (that lead to abortions).

Click below the jump to see the video of Rick Santorum and read about his cynical petition to “go toe-to-toe with Wendy Davis”…Santorum complained that the national party was not showing support for their efforts, when instead, he should let it serve as a sign the Texas legislature has gone too far. The reason national Republicans are not falling in line is because they are having a hard enough time doing damage control over every other social issue that has surfaced this year; voting rights, marriage equality, immigration reform and now women's reproductive rights.

Erica Grieder, a conservative editor at the Texas Monthly, agrees Perry and his party should have just stuck with the economy. Of course Democrats don't mind, this misadventure has been a fundraising and earned media bonanza. Perry has essentially all but doomed Lt. Governor David Dewhurst and set the stage for a flood of national money aimed at making Texas an electorally competitive state.

Santorum made several references to Kermit Gosnell and insinuated that Wendy Davis did not want to prevent such things from happening in Texas. “It's absolutely remarkable to me that someone would be held up as a champion for women by saying that women who go into abortion clinics should be subject to what we had to deal with in Pennsylvania.” In reality, restrictions on safe, legal abortion are what enable monsters like Gosnell to operate and prey on desperate women.

In his only moment of clarity Santorum said:

“The truth is the extreme party on this issue are the folks standing up here saying women don't deserve basic sanitary standards when it comes to abortion clinics, and children who would otherwise be born alive aren't entitled to any protection.”

He must have been talking about his own party because I could not have said it better. Republicans, especially the ones sharing the stage with him, know that this bill will likely lead to most clinics closing altogether leaving women, especially in rural areas, with no professional care at all — let alone the standards of a hospital. He also happened to address the other half of this issue, which is that this same bunch calling themselves “pro-life” do not fight for entitlements on behalf of said children once they have actually been “born alive.”

Santorum promoted a cynical petition (a screenshot of which is reproduced at right) to “go toe-to-toe against Texas State Senator Wendy Davis and anyone else who supports abortion at any time and for any reason.” The graphic makes for good optics, but fetuses do not wear shoes and you can't abort babies that have already been born.

If all the double-talk could be summed up in one sentence it would be when he said, “this is the most apolitical thing this body has ever done”, while literally inserting his politics into a woman's body.