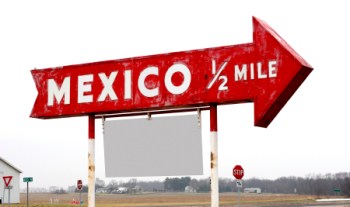 Texas currently has 42 abortion providers. If SB1/HB2 is signed into law, there may be as few as six. In a state where over 70,000 abortions are performed in a typical year, having only six clinics available will be a disaster. In the Rio Grande Valley, where the closest legal, safe abortion provider will now be over 250 miles away, it will be even worse. Women in El Paso might as well go to Las Cruces, New Mexico. For them, it will be over 500 miles to the nearest provider in Texas.

Unfortunately, there is a much closer and easier option for women living along the U.S./Mexico border. Women are risking their lives by crossing the border into Mexico to buy abortion inducing medications, or buying these same drugs on the black market in the U.S. These drugs are unregulated and used without a doctor's supervision.

Read more below the jump.  According to The Monitor:

“Kristeena Banda, administrator of the McAllen clinic, said during a recent open house that the facility has already seen women trying to self-induce abortion by going to Mexico to buy medication. Meanwhile, she said clinic staff has also noticed a drug pipeline from the Valley north, much like the narcotics trade, as women try to obtain abortion medications.”

These illegal and unsupervised channels for abortions expose women to a whole host of dangers. According to Businessweek, “In the past few years, health-care providers in the valley, one of the state and nation's poorest regions, have seen an increasing number of women suffering from incomplete abortions and bleeding after taking drugs unsupervised, they said.” It's the modern day coat hanger.

A Texas Tribune map shows the clinics that will make it through the legislative assault – the blue dots are clinics that will close, the yellow dots are ones that will stay open. There is one clinic that will remain open in Austin, one in San Antonio, two in Houston and two in the Dallas-Forth Worth area.

There are currently two abortion providers in the Rio Grande Valley – in McAllen and Harlingen. Almost 3,000 women in this area had abortions in 2011. Both of these clinics would close under the new law because they, like most other providers in the state, won't be able to meet the bill's severe restrictions.

The Rio Grande Valley has already been hit hard by cuts to family planning services. As a result, there have been more pregnancies, and soon there will be fewer safe options available to terminate those that are unwanted. According to The Monitor, in Hidalgo County alone,”Six family planning clinics closed from 2010 to 2012 as total state funding decreased by about $780,000. Researchers estimated the impact of the funding cuts meant fewer unintended pregnancies were averted in 2012 than in 2010.”

Amy Hagstrom Miller , who owns the Whole Woman's clinic in McAllen, asks the question the legislature doesn't care to think about: “They're going to get the abortions they need. The question is: What are we willing to let women go through?“