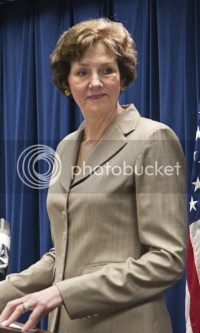 There was news yesterday as one of Texas' many long-time elected statewide officials announced that she would not be running for elected office in 2014. Susan Combs, Texas comptroller since 2006 and statewide officeholder since 1998, is retiring from public service after next year.

Of course, Combs' record of public service has quite its faults. Under her watch, the comptroller's office accidentally millions of social security numbers. She also was caught blatantly misleading voters on 2011's education cuts.

Combs, whose campaign account held over 7 million dollars in January, was considering a run for Lieutenant Governor. Her decision not to run with that kind of piggy bank says a lot, and the signal about the 2014 elections are clear: Even if Rick Perry runs for Governor again, state government will be very different after the next election.

Read on to find out how.The presumption was that everyone would wait for Rick Perry to make precise their 2014 electoral plans. Either everyone (or at least Combs) is confident that Rick Perry will not be running for reelection, or they just don't care.

For Susan Combs, it probably didn't matter. The race she was considering, that for Lieutenant Governor, is the one race in which the incumbent, David Dewhurst, has actually announced reelection plans. After Dewhurst's loss to Ted Cruz last year, Dewhurst's reelection decision is unlikely to be affected by Perry's plans. And that's probably also true of other potential Lite Guv candidates, such as Jerry Patterson, Todd Staples, and Dan Patrick.

And presumably, with the exception of the governorship and maybe the attorney general position, every statewide office appears to be empty for the 2014 elections, allowing the climbing politicians to reach for new heights. Before yesterday, the land commissioner, agriculture commissioner, and comptroller were all presumed to be thinking of a run against David Dewhurst, who is vulnerable and still licking his 2012 wounds.

With Combs' announcement, one of those 2014 vacancies becomes official. Until yesterday, the dominoes were just set up, but now they are falling. As many as five different Republican politicians are openly thinking about a run for Combs' seat, already. Among the potential candidates: Tom Craddick and Debra Medina. So, prepare for the crazy.

Not everyone can successfully run for comptroller, though, so politicians are eyeing the land commissioner and agriculture commissioner seats. It's not certain who will be running for those spots, but what is certain is this: they don't care what Rick Perry does.

Governor Rick Perry or not, Texas government will change in 2015.