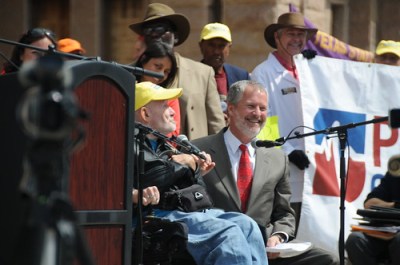 At least 1,200 protesters marched and rode wheelchairs down Congress Ave. to the south steps of the Texas Capitol on Tuesday to demand that lawmakers expand Medicaid by accepting federal funds. These funds from the Affordable Care Act are estimated to cover an additional 1.5 million Texans, reducing the state's 24-percent uninsured rate, the highest rate of uninsured in the country.

Read more about the rally below the jump.“Some have said the low participation rate of physicians is an example of a broken system,” said Dennis Borel, executive director for the Coalition of Texans with Disabilities (CTD), one of the groups who helped organize the Texas Medicaid Matters march and rally. “Rather it points to serious underfunding by the State.” CTD created this letter site for citizens to email their specific representatives: http://bit.ly/txmm.

Republican governors of Florida, Ohio, New Jersey, Michigan, Arizona, Nevada, New Mexico, North Dakota, and Ohio have announced they will accept federal dollars to expand Medicaid in their states. A bipartisan pair of polling firms, Lake Research Partners and GS Strategy Group, were hired by The American Cancer Society to conduct research in several states, including Texas. They found that 58 percent of Texans are in favor of accepting the funds to expand Medicaid, and only 30 percent are opposed. To put that in perspective, 41 percent of Texas ballots were cast for Obama in 2012.

Chambers of Commerce and mayors and county commissioners, including Travis County's, have made statements and resolutions in support of accepting the federal funds.

“Texas will not drive millions more into an unsustainable system,” Gov. Rick Perry has said in opposition, however. Perry's politicization of an issue that many Republican voters apparently do not consider partisan could be an opportunity for the state's Democratic party.

The Texas Medical Association conducted a poll that found only three out of 10 doctors are accepting new Medicaid patients because the program does not reimburse them for the full cost of services. The association claims Medicaid's shortcomings stem from unreasonably low reimbursements paid to doctors, not because the system is too expensive.

DeAnn Friedholm, a former Texas Medicaid director who's now a healthcare expert with Consumers Union, also called for a boost in Medicaid reimbursements.

“The biggest problem with Texas Medicaid today is that the payments for doctors are so far behind what other medical programs and private insurers pay that doctors can't or won't take Medicaid patients,” she said at Tuesday's rally. “Guess who's in charge of setting those rates? The Texas Legislature.”