After bullying the minority of sensible members into submission, extremists on the Texas State Board of Education managed to distort, water down, and politicize the curriculum.  Now they complain that people have gotten the facts wrong in describing the latest version of Texas curriculum standards.  It's true that many people are confused about the current state of affairs, after hundreds of deletions, additions, and last-minute revisions.

Who is responsible for this confusion?  I lay the blame squarely on the radicals who threw in inflammatory and unreasonable suggested revisions all along the way-from wanting to remove Cesar Chavez, Barbara Jordan, and Thurgood Marshall and substitute Sean Hannity and Phyllis Schlafly, to eleventh-hour attempts to call the slave trade the “triangular trade.”  Even though the board ultimately rejected some of these extreme suggestions, it's no wonder the public rebelled.  Many people are left with the impression that the curriculum contains some outrages that have been removed or altered, but the fact remains that extremists bullied the board into passing a highly politicized document.

What remains is a damaged SBOE, with zero credibility and a butchered curriculum still riddled with inaccuracy and instances of plagiarism.  This situation has hurt the entire education system in Texas. For every hour we engage in political bickering, we're not spending that time addressing the need to lower our soaring dropout rate, grapple with problems of high-stakes testing, and determine how to hire and keep good teachers.

One might wonder why the board would engage in such a destructive and divisive process, wasting countless hours micromanaging the curriculum and squandering limited resources for education.  The answer lies in the words of these extremists:  Cynthia Dunbar's calls public education a “subtly deceptive instrument of perversion.” My opponent, incumbent Ken Mercer, brags about giving a teacher coalition a “well deserved spanking.”  These radicals simply don't respect public education. Mr. Mercer, didn't even send his two children to public school.  Many extremist backers have financial investments in charter schools, textbooks, and testing materials designed for private schools that purvey their own worldview.  These members certainly have a right to send their children to private schools, but they should not have a right to undermine the reputation of public education, schools, and teachers.  We can send them that message by voting them off the board in November.

At this point, it is useless to get mired in the specifics of the damaged curriculum, after the board's “death by a thousand cuts.”  Let's focus on the big picture and determine what needs to be done.  We must elect reasonable people in Districts 5 and 10 and then call for a complete review of the curriculum by teachers and experts in the field.  Final decisions on the curriculum should take place in 2011, when we'll have a board in place that reflects the will of the people.  Many of the bullies who sit on the board managed to get there with money from a tiny minority of supporters with radical views.  The board should reflect the views of the larger population in Texas.  After the negative attention the board has received, more people are looking carefully at candidates, and this election in November will reflect the attitudes of a larger number of participating voters. Please help me kick out the school bullies and give Texas students a 21st century education. Take action today by following these three easy steps: 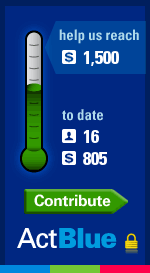