According to the Houston Chronicle's “Texas Politics” blog, a majority of the State Board of Education, including two of its Democratic members, gathered in Spicewood two weeks ago to honor rejected SBOE Chair Don McLeroy.

What I wouldn't give for a copy of that picture! Oh wait … here it is … 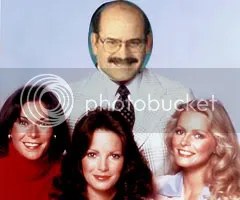 It was quite the lovefest:

His women colleagues also brought gifts – many with a “roach” theme. It's sort of an inside joke that takes one of them to explain in some detail.

Can't you just feel the love? And no wonder!

Terri Leo, R-Spring, noted that “he doesn't shush me any more!”

What a night, perhaps summed up best by the other Democrat present, Rick Agosto of San Antonio.

“I feel like we are at the Alamo,” Agosto said.