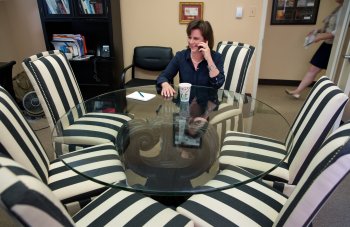 Republicans have a problem when it comes to female voters. Not only did they lose the presidential election in 2012 in large part because of a voting gender gap, but an April ABC/Washington Post poll found that Democrats have a 30 point advantage when it comes to issues that particularly pertain to women.

Now, the New York Times reports, they are holding bootcamps to help coach women on abortion messaging for the midterm election. One key piece of advice? “Rape is a four-letter word. Purge it from your lexicon.”

More on the right's abortion messaging bootcamp – and what it could mean for midterm elections – below the jump.There have already been half a dozen session so far around the country. Participants are asked to describe why they think abortion is wrong on camera, which is them critiqued by the bootcamp's coaches. There are many tips to remember, such as brevity. According to Marjorie Dannenfelser, president of the anti-abortion group Susan B. Anthony List, which hosts the sessions, “Two sentences is really the goal. Then, stop talking.”

Marilyn Musgrave, a former Colorado congresswoman and anti-choice activist, gives advice on framing the topic when arguing with pro-choice Democrats:

Don't let them corner you. Put them on their heels. Ask them, 'Exactly when in a pregnancy do you think abortion should be banned?'

This is a different perspective than the one shown immediately after the 2012 elections. Republicans lost over ten races against vocally pro-choice candidates, almost entirely due to comments directly tied to women's health issues. This year, conservatives not only want to put abortion at the center of the conversation, they want to expand their messaging beyond their base.

And this is why the bootcamps are happening. Some, like Republican pollster Kellyanne Conway, argue that Democrats have had better messaging on women's health. Conway explains:

That was one of the top five public relations coups of all time: making their movement pro-choice and purging the ugly word 'abortion' from the lexicon for decades.

What Conway misses, and perhaps many of the other participants will miss as well, is that the term pro-choice is a descriptive term, not a messaging decision. When someone describes themselves as pro-choice, they are making a statement about their belief that every person has a right to do exactly that: choose. It isn't about removing the word “abortion” from our common conversations. In fact, many pro-choice groups are fighting to bring conversations about abortion into larger society to reduce the stigma around the word. This fundamental misunderstanding of the pro-choice movement is telling, but perhaps not nearly as much as Conway's other piece of advice: don't talk about rape.

Women's health issues are osteoporosis or breast cancer or seniors living alone who don't have enough money for health care.

But not, it would seem, sexual assault or access to preventative reproductive healthcare.

Susan B. Anthony's List is not only working through these bootcamps. They are also making giant media buys to put commercials in states where Democrats are fighting to hold their seats in the Senate. One such commercial stars the parents of a child born premature at 24 weeks. The parents assure the viewers that their child is, in fact, a baby, and that this is what pro-life voters are up against.

Despite the fact that pro-choice people would also agree that the child in question is also a baby, and that once it was born it deserved the best medical care and protection, the goal of these efforts is clear: to shift the conversation to questions about late-term abortions, instead of focusing on the people who are making the choice about whether or not to carry pregnancies to term.

Though these activists are acting like this is a new tactic, it is nothing out of the ordinary. This kind of rhetoric was present during the struggle around abortion access in Texas last summer, and permeates the debates around laws proposed at the state level across the country. What it means for progressive and pro-choice voters is simple: this fight won't be over any time soon.