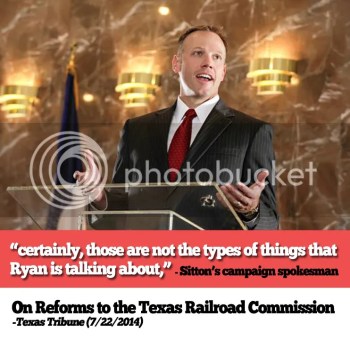 Steve Brown is the Democratic nominee for Texas Railroad Commissioner, the agency that oversees the state's oil and gas industry. Brown is facing Republican Ryan Sitton who was an outlier in a primary otherwise dominated by the Tea Party.

Sitton was able to buck the Tea Party trend in large part because of his support from the very industry he would be tasked to regulate.

According to campaign finance filings the Texas Tribune reports Sitton received $152,000 from the oil and gas industry, more than half of his total money raised.

See why SItton may want to avoid talking about reform below the jump…With Brown running on reforms largely based on recommendations by the state's own auditor, the Sunset Commission, Sitton has avoided talking about the proposals in deference to “other things.”

The one recommendation Sitton has said he would be on board with is changing the name to the Texas Energy Resources Commission, but let's take a step back and review why we have a Sunset Commission in the first place. According to its website “The Texas Sunset Advisory Commission is a 12-member legislative commission tasked with identifying and eliminating waste, duplication, and inefficiency for more than 130 Texas state agencies.”

Sitton's spokesperson told the Texas Tribune, “I think to cut and paste the Sunset review commission's work shows a lack of thought, and certainly, those are not the types of things that Ryan is talking about,”

Sitton's dismissal of the time and work of the Sunset Commission aside, there's good reason to use their work as a guide. They have overseen the abolishment of 79 agencies and saved the state almost $1 billion since they began in 1977, and last session the conservative legislature adopted 75% of their recommendations.

So why wouldn't Sitton want to consider the recommendations of a commission that has a strong reputation for slashing waste and improving the functions of government? Perhaps because in the Sunset Commission's own review they focused their recomendations on moving the Railroad Commission towards being more of an industry watchdog and away from being its lapdog:

Well now we're talking conflicts of interest. The recommendations of the Sunset Commission virtually rules out Sitton as an industry insider pushing back against the exact path he is taking by courting those he would be constitutionally obliged to hold accountable on behalf of taxpayers. A report by the Texas Tribune summed up the reforms Sitton was probably most concerned about:

While Sitton represents the status quo, Steve Brown pushes reform further by advocating 5 main ideas for the Commission including: establishing an office of Public Advocacy, adequate funding, staff training and development, environmental stewardship, and job creation and workforce development. You can see more details on his website where he sums up his vision for the office:

I believe that the Texas Railroad Commission (RRC) can improve on its promise to adequately support industry growth while also protecting the environment, ensuring public safety, and safeguarding land owner and consumer rights. It is important that we continue the abundant growth of our energy industry, as it's the engine of our state's economy. Equally important, the Texas Railroad Commission must have the resources to quickly respond to everyday Texans' concerns. I believe that this agency can once again effectively operate as it was intended- to facilitate energy production while also protecting the interests of all Texans.