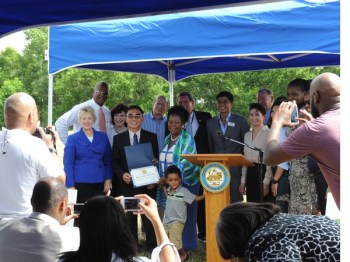 Yesterday, Houston Mayor Annise Parker, City Council Members Stephen Costello and Dwight Boykins, the Houston Redevelopment Authority (HRA) and others broke ground on a new grocery store in southeast Houston that will be the first to target one of the city's food deserts.

Local grocery chain Pyburn's Fresh Foods is building the store in Houston's South Union neighborhood, and it is scheduled to open in early 2015. The project is part of Mayor Parker's broader initiative to improve nutritional access in the city of Houston. This store is funded in part by a $1.7 million loan that contains Federal Community Development Block Grant funds.

The national obesity epidemic has hit Houston hard, with nearly two-thirds of adults either overweight or obese. The problem disproportionately affects those who live in low-income neighborhoods without access to fresh food–Houston has more food deserts, and fewer grocery stores per capita, than many other metropolitan areas in the United States.

This new grocery store is hopefully the first of many that will provide thousands of Houston residents with access to fresh, healthy food.

Read more about food deserts and getting Houston healthier after the jump. The neighborhood where the new grocery store will be is one that lacks easily accessible fresh, healthy foods–what's commonly referred to as a food desert. These neighborhoods exist across the country, and don't have grocery stores that sell fruits, vegetables, and other nutritious, whole foods. They are usually in impoverished neighborhoods, which grocery chains may see as less profitable. Residents may not have the transportation options to easily go to another neighborhood for fresh food. The problem is often compounded by the fact that food deserts tend to only have access to convenience stores and fast food restaurants, leaving residents with unhealthy, processed foods as the easiest option. Together, the lack of fresh foods and the abundant processed foods makes residents of food deserts more likely to be obese.

Targeting food deserts is one way to improve the overall health of the community. In 2011, it was reported that a total of 440,000 Houston residents lived in a food desert neighborhood. This is one reason why, in 2011, Mayor Parker partnered with City Council Member Stephen Costello, The Food Trust and Children At Risk, to create the Houston Grocery Access Task Force. The Task Force released its findings and recommendations in 2012. Among these were that the City of Houston should make available economic development programs to build new supermarkets.

That recommendation began to come to fruition yesterday as the construction of the new grocery store began. In a statement, Mayor Parker praised the construction as an important step forward:

“An estimated two-thirds of Houstonians are overweight or obese and a high percentage of them live in food deserts with no access to fresh food.  This forces families in these areas to rely on unhealthy processed or fatty foods from convenience stores and fast food restaurants.  I am excited that we are able to take the first step to address this problem that impacts the overall health of our residents and am confident there will be additional opportunities for grocery stores in other food desert areas in Houston.”

The new store will also promote economic activity in a struggling neighborhood. At least 25 new jobs will be created. Said City Council Member Stephen Costello, who helped sponsor the project:

“Everyone should have access to fresh food, no matter the zip code. I am grateful to the Vuongs for recognizing the need and reconfirming their commitment to serving the community. Pyburn's will not only provide fresh meat and produce to South Union, but will also create jobs for our city's youth and spur economic development in an area ripe for more industry.”

Yesterday's start to construction is only a first step as the city of Houston continues to tackle the issue of food deserts. It's an important reminder of Mayor Parker's commitment to the health of her citizens, and her dedication to improving Houston.