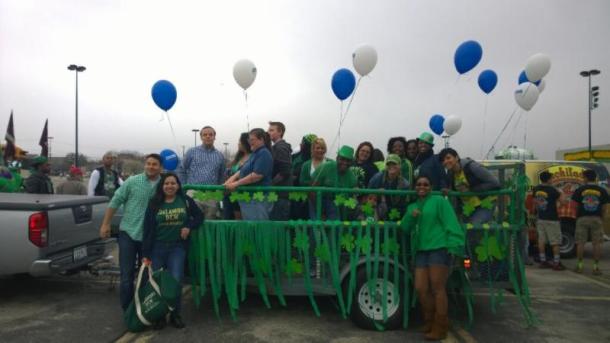 Some of the Dallas County Young Democrats and others taking part in the 2014 Greenville Avenue St. Patrick's Day Parade on Saturday March 15th.

The first step of the Convention process of the Texas Democratic Party for 2014 is the Senate District Convention coming up on Saturday, March 22, 2014.

Register with the Texas Democratic Party to get information on time and place and to learn about the convention process at http://register.txdemocrats.org

Registration 9 AM, Convention 10 AM

The 2014 Texas Democratic Party State Convention will be held here at the Dallas Convention Center on June 28 and 28. For more information see this page.

They're an informal, inclusive progressive social group. Raise your spirits while you raise your glass, and share ideas while you share a pitcher.

Drinking Liberally gives like-minded, left-leaning individuals a place to talk politics. You don't need to be a policy expert and this isn't a book club – just come and learn from peers, trade jokes, vent frustration and hang out in an environment where it's not taboo to talk politics.

Bars are democratic spaces – you talk to strangers, you share booths, you feel the bond of common ground. Bring democratic discourse to your local democratic space – build democracy one drink at a time.

Drinking Liberally's Addison chapter is the longest continuously running chapter in the DFW Metroplex since 2005.

In Texas candidates must get a majority of the votes in the primary or the top two have to be in a runoff. This year that will be on May 27. Barring changes due to recounts or to those outstanding overseas ballots, these will be the runoffs we will see in Dallas County:

State Board of Education, Dist 13: Erika Beltran and Andrea Hilburn

You can find links to the websites and the contact information for these candidates at our primary candidate filings page. NOTE: That list does not show websites, Facebooks, or other contact information for some of these because they have none or have not given them to us. But for US Senate, see the next article about Kesha Rogers (her opponent, David Alameel, does have his own site). For Agriculture Commissioner, Jim Hogan has not raised or spent any money and says he will continue not doing so if he wins the runoff, according to this article (his opponent, Richard “Kinky” Friedman, does have his own site). For State Board of Education, Andrea Hilburn has no sites but answered questions at this page (her opponent, Erika Beltran, also has a page there, in addition to her own site). For County Criminal Court 5, Etta Mullin has no sites but her bio was posted at this page by the Metrocrest Democrats (her opponent, Lisa Green, also has a page there, besides her own site). For Justice of the Peace, Precinct 4, Place 2, Fred Jackson has no sites (his opponent, Katy Hubener, does have her own site).

One candidate in the runoff for US Senator is Kesha Rogers, a follower of convicted felon Lyndon LaRouche. Our Texas Democratic Party State Chair Gilberto Hinojosa has sent out this notice:

“Kesha Rogers is one of the candidates on the ballot for U.S. Senator in the Democratic primary — but do not be fooled. Kesha Rogers is not a Democrat.

Ms. Rogers is part of the “LaRouche Movement,” which has a history of violent rhetoric. The focus of her campaign is impeaching President Obama. Rogers has even paraded around Texas with a poster of the President with a Hitler mustache.

Rogers believes that the U.S. economy is secretly controlled by London financial institutions and she has advocated for colonizing Mars.  That's not what real Democrats stand for.

All my best –Gilberto Hinojosa”

Read the Texas Democratic Party's State Executive Committee Resolution on Kesha Rogers as a pdf at this page.

(For the latest updates on local events, and links to more info about these, check out the DallasDemocrats on Facebook and Twitter, and the DCDP website Calendar. To add an event or make a change or correction, contact the party office or email the editor: BillHowellDCDP AT Yahoo.com.)

Far North Dallas Richardson Democrats County Chair Darlene Ewing will discuss the election results. We will definitely discuss the Senatorial District Conventions to be held on March 22 though! VERY important if you want to be a delegate to the TDP Convention in Dallas in June (6:00 pm, Kasra Restaurant, 525 West Arapaho Rd #21, Richardson) 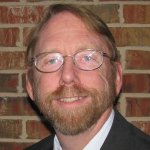 Democratic Party Senatorial District Conventions With Precinct Caucuses (In each State Senate district in Dallas County; Locations pending and will be posted and announced later)

Campaign Kick-Off Fundraiser for Milton Whitley Candidate for Texas State Representative House District 113. Tickets are $50.00 and will be available at the door or online through ww.whitleyfortexas.com. For information or to RSVP, please contact Jeff by email to jcasper AT whitleyfortexas.com. (6 PM, Mt. Hebron Christian Academy, 901 Dairy Road, Garland, TX 75040) 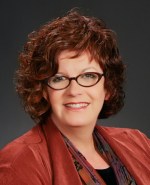 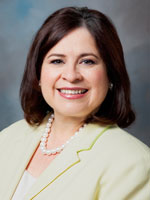 Joe Wells 66th Birthday Joe Wells is retiring as Dallas County Treasurer at the end of the year, but Joe is not retiring from the Democratic Party. Help support the 2014 Democratic ticket. Donations to the Dallas County Democratic Party Coordinated Campaign are welcomed. In 2006 We Turned Dallas County Blue. In 2014 working together We Can TURN TEXAS BLUE TOO. Hot dogs and all the fixins & birthday cake. RSVP 972-978-1440 or email to Joe.Wells AT sbcglobal.net. (3:30 PM – 6 PM, At Joe and Beth and Bob's House, 4243 Hill Top Ln. Grand Prairie 75052)

Early Voting for the 2014 Democratic Primary Runoff Hours and locations will be posted later at http://www.dallascountyvotes.org/

Dallas Convention Center. Sign up for more information at this page.