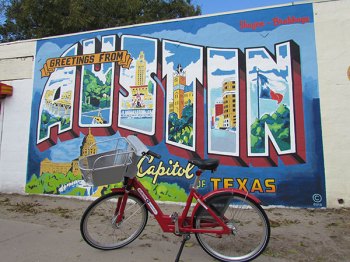 From March 7 to 16, Austinites and SXSW visitors checked out B-cycle bikes over 17,000 times. On March 15, each bike was checked out an average of 10.1 times, setting the North American system record for most per-bike checkouts.

In total, B-cycle riders traversed over 22,700 miles during the 10-day period.

Austin B-cycle is a nonprofit that manages the bike-share system, which consists of 40 checkout stations and about 400 bicycles.

Read more about Austin's record-breaking week after the jump.

AUSTIN- Austin's bikeshare system Austin B-cycle smashed bikeshare system records during SXSW, with heavy usage of the system throughout the 10-day festival. On Friday, March 15, it set a North American system record of 2,774 checkouts for an average of 10.1 checkouts per bike/day, besting the previous record in September 2013 of 7.2 checkouts per bike/day set by the successful New York City Citibike program.

During the March 7- 16 festival, Austin B-cycle had 17,724 bike checkouts totaling 22,744 miles ridden, averaging 6.4 checkouts per bike per day for the 10 day period. The Austin Convention Center B-station topped the list in overall checkouts at 1,828, followed by Davis at Rainey Street and City Hall B-stations.

“Not only are we thrilled by how attendees embraced our system, we are impressed by how well the B-cycle bikes, stations, and software held up to the high usage,” McFadden continued. “I also want to thank our stellar B-cycle staff for all their hard work, putting in over 12-hour days each day making sure the system ran smoothly.

The Austin B-cycle staff and volunteers did an additional 2,975 bike checkouts during SXSW to balance bike availability at B-stations and maintenance bikes. There were no major station outages during the 10-day period with the full system available for general use 24-hours/day.