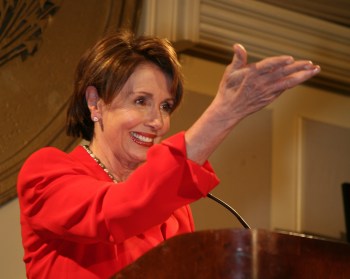 She discussed When Women Succeed, America Succeeds, House Democrats' economic agenda to close the wage gap between men and women.

In Texas, equal pay for women has been in the spotlight as Senator Wendy Davis' campaign highlights Greg Abbott's silence on the issue.

Read more about equal pay in Texas after the jump.50 years after the signing of the Equal Pay Act, women still earn significantly less than men for the same work.

In Texas, the wage gap between a man and a woman in the same position is $7,859 annually.

Pelosi's economic agenda focuses on the specific challenges that women face in the workforce, including the work and family balance, difficulty finding child care, and unequal pay.

“Women are equally qualified with male counterparts, same education, experience, training, qualifications and the rest and in many places women make 77-cents on the dollar,” she said at the forum.

The When Women Succeed, America Succeeds also calls for increasing the minimum wage, expanding family and medical leave, and providing access to pre-K.