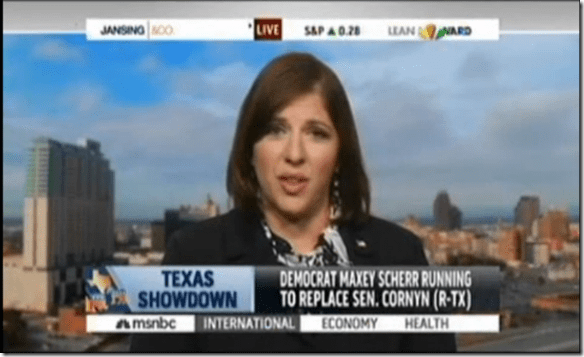 Democrat and candidate for U.S. Senate, Maxey Scherr, appeared on MSNBC to share with Texas voters on why she's running to replace U.S. Senator John Cornyn. Scherr, who is endorsed by Burnt Orange Report, seems very passionate about defending and standing up for groups of Texans our two U.S. Senators have adamantly refused to support in the Senate — including women, the LGBT community, workers, and immigrants.

Scherr recalled the moment that made her want to run against Cornyn — when Cornyn showed complete disregard for LGBT rights by not only voting against the Employment Non-Discrimination Act (ENDA), but puckering his face and giving the legislation two thumbs down when called to make a vote. Scherr, like the majority of Texans would be also, was disgusted by Cornyn's actions in the chamber.

Scherr also shares her opinion on David Alameel, who is one of her opponents running in the Democratic primary for U.S. Senator. Without disrespecting Wendy Davis' and Leticia Van de Putte's endorsements of Alameel, Scherr simply points out Alameel's past financial donations to multiple Republicans — including John Cornyn, Rick Perry, and Greg Abbott. Scherr calls Alameel a “wolf in sheep's clothing.”

Watch the interview below the jump.