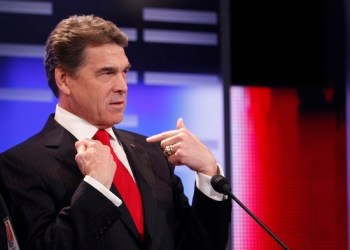 This week Sen. Wendy Davis, Sen. Rodney Ellis, Sen. Sylvia Garcia, and Sen. John Whitmire have called for the resignation of William White, the chair of the Finance Commission of Texas.

Although White holds the top spot in the commission responsible for protecting consumers, he is also vice president of Cash America, a predatory lending company that loans money to consumers against their next paycheck at extremely high interest rates. The U.S. Consumer Financial Bureau recently forced Cash America to pay $14 million in refunds after the company illegally overcharged members of the military. The lenders also paid $5 million in additional fines after destroying records to obstruct the investigation.

And in December, White told the El Paso Times that customers who become trapped in debt to payday lenders only have themselves to blame, claiming that the Finance Commission has no responsibility to regulate such exploitative practices.

Yesterday Wendy Davis called on Rick Perry to remove William White from the Texas Finance Commission. Davis has prioritized payday lending reform in order to limit the ability of predatory lenders to exploit consumers, especially veterans and their dependents. Her advocacy for predatory lending reform has been praised by several groups, including the Texas Baptist Christian Life Commission and the Texas Catholic Conference.

Read the senators' letters after the jump.Sen. Wendy Davis' letter to Rick Perry: We are writing to ask that you voluntarily resign your post as Chairman of the Finance Commission of Texas as soon as practicable.  Your recent comments published in the El Paso Times on December 29, 2013 contradict your duties as the presiding officer and member of the Finance Commission and have eroded our confidence that you can perform the responsibilities assigned to you by statute with fairness and without prejudice.

By law, the Finance Commission “shall carry out its functions in a manner that protects consumer interests, maintains a safe and sound banking system, and increases the economic prosperity of the state.”  The Finance Commission is also responsible for the oversight of the Office of Consumer Credit, which regulates the consumer credit industry and educates consumers and creditors with the goal of “producing a fair, lawful, and healthy credit environment for social and economic prosperity in Texas.”

Your recent comments betray both the mission and the responsibility of the Finance Commission and the Office of Consumer Credit to protect consumer interests and to foster economic prosperity.  In the interview with the El Paso Times, you are quoted as questioning the motivation of payday loan borrowers and suggest that borrowers may be using the loans for less than necessary items.  As the presiding officer of the Finance Commission you should be well aware that most consumers of payday or auto title loans use them to pay for unexpected emergencies or for ordinary expenses because they simply do not make enough to make ends meet.

In 2012 alone, 35,000 Texas families lost their cars to auto title businesses, payday and auto title businesses drained $1.25 billion in fees from working families, and 32 percent of non-profit clients requesting charitable assistance were in trouble with payday or auto title loans according to Texas Appleseed.  Additionally, women, minorities, and low-income consumers are disproportionately impacted by the negative economic effect of payday loans, often hindering the financial prosperity of these populations and increasing economic inequality.  By looking at these shocking numbers, it appears the payday loan industry prospered at the expense of Texas families and communities. By virtue of your current position as Chairman of the Finance Commission, you cannot turn a blind eye to these facts, regardless of your outside employment as vice president of a payday lender.

Furthermore, the resolution passed by the Finance Commission on April 20, 2012 that bears your signature is deeply concerning.  It can be argued that this resolution is an attempt by the Commission to influence legislation, which as you should be fully aware, is illegal.  The payday industry has fought tooth and nail to defeat the passage of local ordinances, and we are happy the industry's efforts failed in 11 Texas cities, including, most recently, our hometown of Houston.  To pass a resolution that discourages local control gives the appearance that you seek to pursue the interests of the payday loan industry and not Texas consumers.  We intend to look further into whether the resolution is indeed an improper and illegal use of state resources.

By requiring by statute that one member of the Finance Commission be a consumer credit executive, the legislature hoped the requirement would bring knowledge and expertise of the industry to regulation enforcement and that any conflicts of interest would and must be avoided.  In confirming your appointment as Chairman, as with all our Senate colleagues, we trusted you to perform the duties assigned to the post judiciously with the goal of protecting Texas consumers.  Turning the focus and blame towards the consumer as you did in your interview severely calls into question your ability to do so.

Texans deserve a Finance Commission that is looking out for them and their interests. As you have lost our confidence and the public's confidence to carry out the duties of your office competently, fairly, and without prejudice, we are asking you to resign your position as Chairman of the Finance Commission.