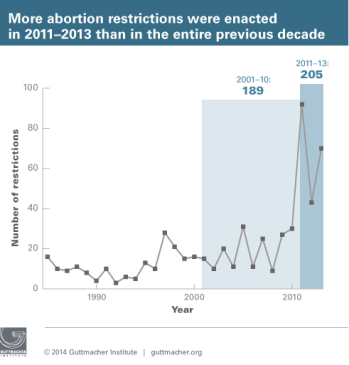 Anti-choice organizations have been keeping reproductive justice advocates on the defense for the past three years, according to a new Guttmacher Institute report.

From 2011 to 2013, more abortion restrictions were enacted than in the previous decade—and Texas led the attack on reproductive rights.

During the three-year period, 205 abortion restrictions were implemented across the US; from 2001 to 2010, states passed a total of 189.

Read more about the assault on women's rights after the jump.Last year, 39 states enacted 141 provisions related to reproductive health and rights. Half of those provisions were abortion restrictions.

45 percent of those provisions were based on four pieces of “model legislation” written by Americans United for Life: targeted regulation of abortion providers (TRAP), restrictions on insurance coverage of abortion, 20-week or “fetal pain” bans, and restrictions on administering medication abortions.

In the past three years, states enacted four times as many of these restrictions as they did between 2001 and 2010.

In 2013, four states—Texas, North Dakota, Arkansas, and North Carolina—enacted a total of 26 regulations, almost a third of the legislative restrictions on abortions passed that year. 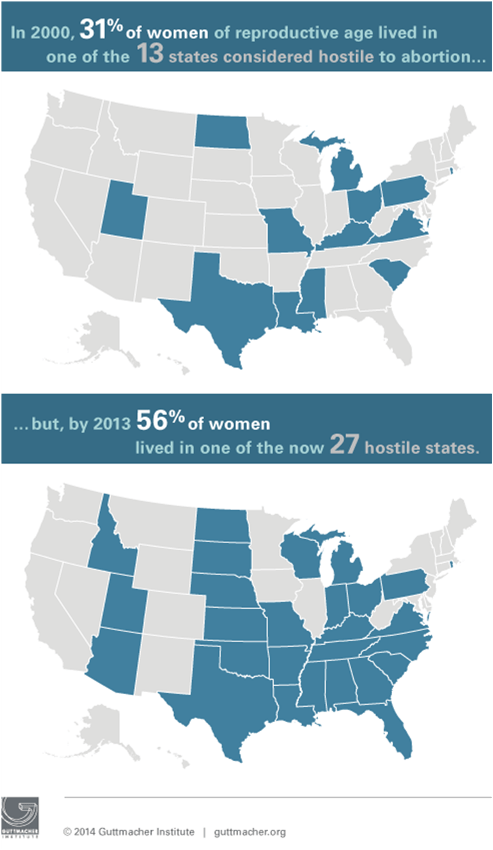 But legal hostility toward abortion rights is not isolated to purely red states or conservative legislatures. In the past decade, even liberal and moderate states have fallen victim to the influence of wealthy anti-choice groups.

According to the Guttmacher Institute, there are ten major abortion regulations that do not improve the health or wellbeing of women seeking to exercise their constitutional right to an abortion.

In 2000, the majority of states had three or fewer major restrictions on the books. As of last year, 27 states have four or more.

[M]andated parental involvement prior to a minor's abortion; required preabortion counseling that is medically inaccurate or misleading; extended waiting period paired with a requirement that counseling be conducted in-person, thus necessitating two trips to the facility; mandated performance of a non-medically indicated ultrasound prior to an abortion; prohibition of Medicaid funding except in cases of life endangerment, rape or incest; restriction of abortion coverage in private health insurance plans; medically inappropriate restrictions on the provision of medication abortion; onerous requirements on abortion facilities that are not related to patient safety; unconstitutional ban on abortions prior to fetal viability or limitations on the circumstances under which an abortion can be performed after viability; or a preemptive ban on abortion outright in the event Roe v. Wade is overturned.