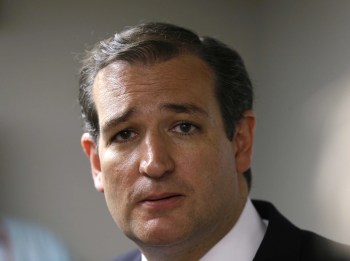 In August, Americans learned that Ted Cruz is a Canadian citizen. Though his status as “natural born” American citizen is in question, his Canadian citizenship is not, given his Calgary birth.

More below the jump.Renouncing his Canadian citizenship is, of course, quite useful if he's planning a 2016 run. Unfortunately, nowhere in the Constitution does it say one is eligible to run for president if not naturally born a citizen but later having rejected other countries' citizenship. Cruz's eligibility is an open question in part because the language in the Constitution is no non-specific on this issue.

A Cruz 2016 campaign would be plagued by this question repeatedly. Though not nearly as fervently as the lunacy of Obama birtherism, some on the right have challenged Cruz's eligibility. His primary opponents' supporters would certainly use it to their advantage. But it's hardly the prime reason not to allow Ted Cruz into the Oval Office.

What good is a president with such disdain for the country that he'd shut down the government over a petty, doomed plan?

Share. Twitter Facebook Google+ Pinterest LinkedIn Tumblr Email
Previous ArticleTexas Will Run Out of Water Before It Runs Out of Oil
Next Article The Top Moments of Wendy Davis's Filibuster, As Chosen By The BOR Staff