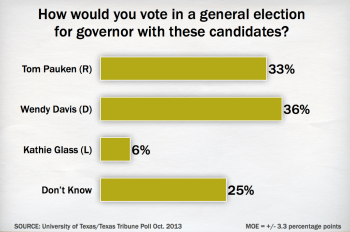 Tom Pauken announced Thursday that he would not file to run for Governor in the Texas GOP primary. Pauken served as Texas Republican Party Chairman in the 1990's and more recently as Chairman of the Texas Workforce Commission.  Pauken was thought to be Greg Abbott's chief opponent with the highest name ID, but said he could see “no realistic path to victory.” The once-fiery tone he used to lob attacks on Abbott's conservative credentials has cooled in his realization that his campaign was “nowhere near” where they needed to be financially or organizationally.

Pauken's attacks on Abbott were not unlike those coming from the Democrats warning of more of the same, Rick Perry-style cronyism and an allegiance to big monied special interest over everyday Texans. The other common attack revolves around a campaign tactic Abbott continues to employ – silence on important but controversial issues. Ideally Abbott would like to leave his primary without committing himself to some very unpopular positions that are held by his base.

See what else Pauken has said about Abbott and Wendy below the jump.Abbott repeatedly refused to debate Pauken, prompting the former RPT Chair to release the following statement:

Greg Abbott continues to hide from the Republican primary voters of Texas, unwilling to engage in the arena of ideas and to discuss the future of Texas. Texas voters deserve better…If he is unwilling to debate me in the primary, can Republican voters be confident he can hold his own in a debate against Wendy Davis if he wins the nomination?

The Wendy Davis campaign and the media have also expressed annoyance at Abbott's unwillingness to divulge his position on basic policy questions.

According to the Secretary of State's website there are still 3 primary challengers to Abbott: former Valley TV News personality Miriam Martinez, former radio personality Lisa Fritsch, and Larry SECEDE Kilgore. A recent poll by the Texas Tribune showed all 3 polling within the margin of error with “Don't Know” receiving 42%.

Abbott is likely keeping his powder dry because he knows most voters aren't engaged in a race they still have nearly a year to decide on, but even Pauken knows that Abbott won't be able to be silent for ever. Before Wendy Davis made her announcement, Pauken warned Abbott to take her seriously.

“He [Abbott] is going to have a serious race in the general election if Wendy Davis gets in the race. I disagree with her philosophically but she is a smart lady…”