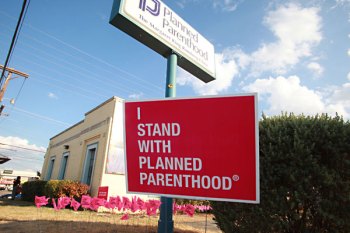 Since October 31, when the 5th Circuit reversed the injunction on HB 2 abortion restrictions, clinics around Texas have been forced to cancel appointments and deny abortion services to women in need.

But despite the institutional roadblocks that conservatives have established between women and their reproductive rights, clinics are still fighting to restore abortion access.

Two clinics recently succeeded: Practitioners working at a Planned Parenthood in South Austin and a Whole Woman's Health in Fort Worth received admitting privileges at local hospitals this week, allowing them to once again provide safe abortion care.

Read more about these clinics after the jump.One of the four abortion restrictions in HB 2 is the requirement that abortion providers have admitting privileges in a hospital within 30 miles of their clinic. The requirement offers no medical benefit to women seeking abortions, and many hospitals are reluctant to drum up controversy by offering the privileges to abortion practitioners.

However, after Attorney General Greg Abbott appealed the ruling, the 5th U.S. Circuit Court of Appeals allowed the provision to take effect only three days later.

As a result, dozens of clinics were forced to stop offering abortion services and cancel existing appointments.

Slowly, abortion services are being restored: First, at the south Austin Planned Parenthood surgical center, then at the Whole Woman's Health in Fort Worth, where practitioners received hospital admitting privileges.

Not every clinic will be able to clear this hurdle, though, especially in rural and south areas where religious hospitals will be reluctant to offer admitting privileges.

By some estimates, the provision will prevent 22,200 women from obtaining a legal, safe abortion, which could drive many women to seek flea market abortion drugs or a back alley procedure.

The most recently opened center, the new Planned Parenthood Southwest Fort Worth Health Center, held its ribbon cutting ceremony this week. Although the center will provide women and men with crucial sexual health and pregnancy prevention care, it is currently unable to offer abortion services because none of the doctors have admitting privileges at local hospitals.

Natalie tweets from @nsanluis. Photo courtesy of the Austin Chronicle.