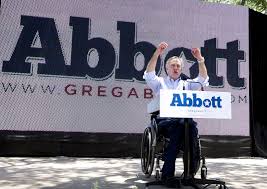 The Greg Abbott campaign continues to avoid the real issues important to Texans and focus more on federal and local issues instead of the one's his prospective office actually deals with. It's no wonder a recent article in Texas Monthly referred to him as having, “little knowledge of state government.”

As we reported previously Greg Abbott's website does not even list public education on his website under, “Issues”, but has expressed “reform” as a pillar of his education platform. That's why it is noteworthy that a poll being conducted on his campaign website asks, “Which reform do you think is most important,” but does not even include Public Education as an option.

Consistent with the “Issues” already listed as important by his campaign, preventing the implementation of Obamacare is first on the list. The rest looks like a paranoid tea partier's list pulled from Alex Jones' InfoWars more than someone who wants to govern over the nation's 2nd largest economy. Apparently the campaign believes that, “open carry and campus carry for CHL holders,” is more important to Texans than education reform or even immigration reform.

Paul Burka of Texas Monthly made a similar critique when he wrote, “The Abbott proposals do not build one highway, they do not educate one child, they do not improve the health of one community. Abbott is doubling down on the tea party agenda.”

Check below the jump and see who called Abbott, “a perfect candidate for a role on a Gunsmoke remake.”

Abbott's campaign is playing on safe turf, and appears ready to avoid talking about the issues that Texans are most interested in. According to a recent Texas Tribune poll “Immigration” was the top issues followed by “Border security,” tied for 5th were “Education,” “Healthcare,” and “The economy.” A full 2/3s of Texans support a path to citizenship, and most support dreamers who want to get a college degree — and all this could get really awkward in the Republican Primary in Texas.

The Texas State Teachers' Association has been vocal about the Attorney General being so mum on education. Earlier this week, in addition to the “Gunsmoke” reference they stated:

Since he announced his candidacy for governor, Attorney General Greg Abbott has had very little, if anything, to say about the value of public schools and the educators who teach our children. Instead, he continues to pander to the dreams of ideologues..

The Abbott campaign may be sitting on a lot of cash and an air of inevitability but it is not clear how long even Republican primary voters will allow him to avoid discussing policy on education and immigration.

Burka ended his piece asking, “Is the tea party agenda the majority viewpoint in Texas these days? Or is it a fringe agenda? The tea party is loud, that's for sure. But do the majority of Texans embrace it?”

Well that remains to be seen, but one thing is now certain — Greg Abbott sure thinks so.