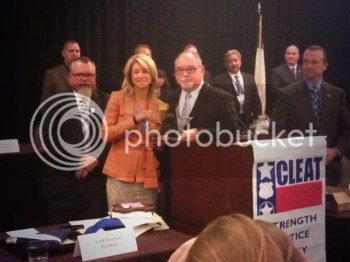 Yesterday, Sen. Wendy Davis received the “Legislative Crime-fighter of the Year” award from CLEAT for her excellent record on public safety issues and specifically for her work addressing the state's rape kit backlog that has emerged as a tremendous success story.

“I'm humbled to receive the Legislative Crime Fighter of the Year Award from the Combined Law Enforcement Associations of Texas, for our efforts to crack down on drunk driving, keep our border communities safe, and take predators off the streets.”

Davis was the lone Democrat to receive an award. Law enforcement is generally thought of as a conservative's constituency, but in her 2012 reelection campaign Davis swept every major police and firefighter association endorsement in Tarrant County including CLEAT.

Click through the jump to see what Wendy says needs to change in Austin and who else made an appearance…Davis speech highlighted her record of working in a bipartisan fashion to “cut through red tape” so that law enforcement could do their jobs and keep Texans safe. She didn't mention her chief opponent in the Governor's race but said that, “All of the potential, all of the things that we can achieve together will not happen without the right leadership in Austin.”

She also warned against those elected officials who take the credit for our state's successes saying, “Politicians in Austin are not the ones who built this state into the great state it is. Instead it was everyday, hardworking Texans like you.”

That message wasn't lost on Greg Abbott who later also addressed the conference attendees. He managed to maintain his signature attack on Washington but promised to listen and compromise as the state's “Chief Executive”, “We've seen the people's business be frustrated and an inability to get things done.” He said there were multiple reasons why the two parties could not come together and work things out, but that “lack of communication” and a “lack of cooperation” were two major factors.

Abbott's speech was noticeably tone-down and sparing of red meat — possibly taking a cue from Wendy? He did however say said that Texas needed more “boots on the ground” to protect our borders. He was also eager to talk about his “open door,” policy for Texans with concerns, but as the campaign heats up and his opponents attack from the right, it will be interesting to see how much talk about cooperation and collaboration remains. 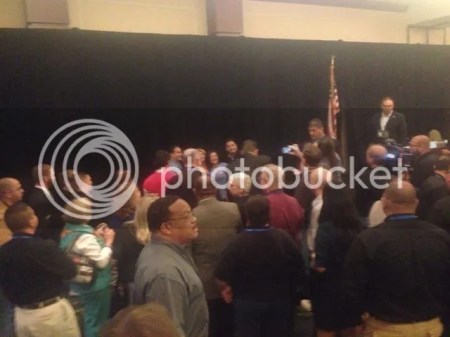 There was no doubt who the crowd favorite was, though. They were quiet and respectful during Abbott's remarks but when it came time for photographs with each speaker, let's just say a picture is worth 1,000 words.