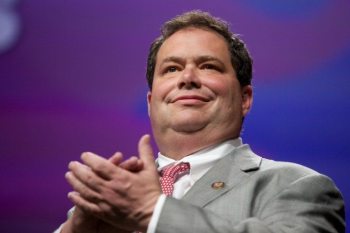 As the Republican-caused government shutdown continues to hurt Texans and the rest of the country, Rep. Farenthold (R-Corpus Christi) is once again reminding us why he is one of the worst things to come out of Texas.

Defending his party's malicious tactics, Farenthold was reportedly “unfazed” by the possibility of a government shutdown. Farenthold stated that Congressmembers like himself were “paid the big bucks to figure these situations out,” in order to avoid the shutdown that Farenthold failed to avoid.

“Basically a paid vacation,” is what Farenthold had to say about the shutdown.

Farenthold and the rest of the Republicans clearly fail to realize the negative impacts their selfish actions are causing the country. Just the figure of 800,000 federal workers furloughed as the result of the shutdown is enough to make anyone angry. In fact, the government shutdown is already affecting Farenthold's district, and here is Farenthold cheering it on without any remorse.

Read more about how the shutdown is affecting the country, including Corpus Christi, below the jump.

Photo credit: Patrick Michels/Texas Observer“Worst thing that happens is some museums close,” is the message Fox Republicans and Fox News are now desperately trying to convey to their conservative viewers. But that can't be further from the truth.

As many as 800,000 of the country's 2.1 million federal workers are being furloughed as the result of a shutdown. The head of the Environmental Protection Agency says that the regulator would “effectively shut down” without a deal to fund the government.

The U.S. Centers for Disease Control and Prevention have had to halt a highly important seasonal influenza program. Most of the FDA food safety inspections have also been suspended at the moment.

The country's national parks have also been forced to close without a government funding deal, as have the Smithsonian Museums.

Remember when conservatives were outraged when White House tours had to be temporarily closed during the sequester deal failure? Saying President Obama was taking it out on the children of America? The Republican's level of hypocrisy is just unbelievable, and their reckless actions incomparable to the what will actually end up adding to the budget deficit.

The American youth and mothers that truly are being affected this time are the women, infants and children that rely on the support of the Special Supplemental Nutrition Program for Women, Infants and Children (WIC), program that provides healthy food for low-income pregnant women and new moms. Also being affected are patients and children with cancer that will be turned away from National Institutes of Health clinical trials.

At the National Institutes of Health, nearly three-quarters of the staff was furloughed. One result: director Francis Collins said about 200 patients who otherwise would be admitted to the NIH Clinical Center into clinical trials each week will be turned away. This includes about 30 children, most of them cancer patients, he said.

KRISTV-Corpus Christi News reported the day before the shutdown that lenders are worried about backup of loan approvals at the IRS.

“Another problem with the impending shutdown is loan approvals, since getting those requires an IRS document. That could also cause a backup the market that at least one lender shared concern over today.”

“Blake Farenthold couldn't be more out of touch. He sees the government shut down as a political game, and couldn't care less about the real harm he is causing hard working folks in his district. Today Texans did not wake up to a “paid vacation,” they woke up to uncertainty about when they can get back to work, and whether they will be able to pay their upcoming bills. Farenthold and his Tea Party Republican posse pushed Texas over shutdown cliff, and they will be held accountable for all the harm they are doing to our great state.”

But of course none of these people matter to Republicans. It isn't the first time Republicans have turned their backs on them, and it won't be the last time. That is, until Republicans stop being elected to office.

This is what voters of Farenthold's district need to keep in mind come 2014: They have a choice. Because Farenthold's seat isn't completely immune by gerrymandering. This is one seat Democrats can fight to take back.