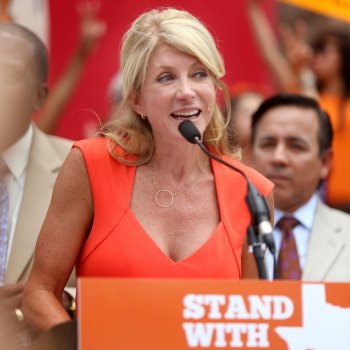 The list of Texans and non-Texans begging Wendy Davis to run for governor is getting longer and louder, and powerful political organizations are listening.

Recently, EMILY's List President Stephanie Schriock talked to the Dallas Morning News about how much the organization — much like most women, Democrats, and especially women who are Democrats — absolutely love state Sen. Wendy Davis.

And love from EMILY's List is a special kind of love, because it comes with some pretty hefty financial campaign support.

“Texas is moving demographically in the right direction for Democrats,” Schriock said in the interview. “More importantly, we've got a candidate in Wendy Davis, if she decides to do it, who can really reach out to communities that haven't voted for Democrats in quite awhile.”

Read more about Wendy Davis and EMILY's List after the jump.Both on the state and federal level, women are still far from reaching gender equity in political office. The vast majority of legislators are men, and only five sitting governors are women.

And they're damn good at what they do. In 1991, they put Ann Richards in the Governor's Mansion. They have also helped elect several women to Congress and even more to state and local office, including Rep. Jessica Farrar, Rep. Donna Howard, and of course, Sen. Wendy Davis.

EMILY's List, which provides campaign funds, political consultation, and training seminars, is part of the reason Wendy Davis won a Senate district that also voted to elect Mitt Romney. They connect their national network of supporters to specific candidates across state lines, a strategy that may work particularly well for women candidates who have recently received nationwide attention.

Schriock also understands that, although access to women's health care and reproductive rights are crucial political goals, Davis' political fearlessness is not restricted to a few issues. Her history of standing up for economic and social issues like payday lending, often with leaders across the aisle, shows that she is capable of reaching out to voters who don't traditionally vote blue.

“I look at that record of economic advancement, economic empowerment and her work with veterans all as issues that are above and beyond what she's known for right now,” Schriock said.

“2012 was such a momentous year with women voters stepping up and voting for good Democratic women and men, including the re-election of Barack Obama, and standing against what we are seeing as a Republican move to revert back to the policies of the 1950s on all kinds of issues,” Shriock said. “Because those women voters said no to the Republicans and yes to the Democrats, we have so much momentum moving forward.”

Her comments especially ring true for Texas, where suburban women are gradually moving farther and farther from the right toward the center, according to The Texas Tribune. Tea Party Republicans have a PR issue with women and people of color, two groups that comprise the majority of potential voters.

Which is all to say: Wendy Davis, the suspense is terrible. We'll get on our knees and beg if you want us to, but please don't make us. Just be our governor.