That groan you hear emanating from downtown Austin is the collective exasperation of staffers and lawmakers who are about to be called back for a third special session this summer.

The House and Senate ran out of time to finish transportation and resolve conflicts between the two bodies in part because much of the second special session was spent on a high-profile fight against anti-woman legislation designed to block access to abortion in Texas.

Now, a Republican legislator is blaming the cost of the subsequent special sessions on Senator Wendy Davis, and there are rumors that campus carry and tuition revenue bonds may be added to the call.

In reality, it's all the fault of Republicans, who can't seem to take care of basic functions of government despite holding large majorities in the House and Senate and every statewide office.

More below the jump about the legislative year that won't end.  This third special session is the fault of Republicans, who despite huge majorities in the House and Senate and every statewide office, cannot seem to get basic functions of government under their control.

Republican leaders can't seem to rein in their anti-spending Tea Party contingent or the growing number of proto-statewide candidates in their party that care more about winning headlines and kowtowing to an extremely conservative primary electorate than getting anything done.

To be fair, Democrats' votes are needed to pass any resolution that taps the Rainy Day Fund — and the majority of members appear to oppose any restriction or “floor” on the RDF to limit future spending, given the ongoing overall challenges of paying for anything in this state. Regardless, the fact that our state is trying to fund something as crucial as basic transportation infrastructure from what is supposed to be an “emergency” pool of money shows how far astray Republicans have led Texas in raising sufficient revenue to cover basic costs of civilization. 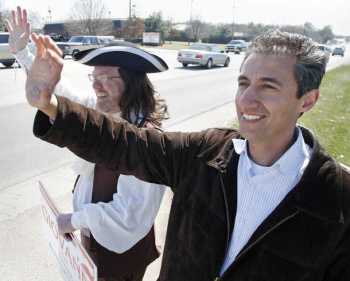 Capriglione, depicted at right (he's not the one in the tri-corn hat, but I can understand the potential confusion), clearly doesn't understand how our state government works. Let's remind him:

We are having a third special session because the Republican Party is dysfunctional and unable to govern, and because scoring points with their primary electorate has become more important than running the state well, if at all.

Now, rumors are swirling that campus carry may return in the special, as will tuition revenue bonds. “Guns on campus” was stopped in the regular session by the 2/3rds rule in the Senate, which is itself only in effect if there is a “blocker bill” requiring a 2/3rds vote to suspend the rules and take up other legislation. There have been no blocker bills this session.

Tuition revenue bonds, or TRB's, are another example of good, common-sense legislation that has been stymied by Republicans' emphasis on passing divisive legislation and opposition to things like “spending money to fund civilization.”

What's abundantly clear in all of this is that Republicans are not fit to govern Texas. They care more about scoring cheap political points with their primary voters than funding roads, and are more interested in passing vicious anti-woman legislation than doing anything to create jobs or grow our Texas economy.

For voters, the choice is clear: what's best for Texas is getting these Republicans out of office.