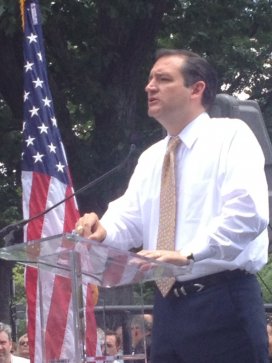 Last Monday at a rally on Capitol Hill, Ted Cruz railed against what he called the “indefensible” immigration bill that has already passed the Senate.

Speaking of “indefensible,” guess who organized the rally? White nationalist John Tanton. He has called black Americans a “retrograde species of humanity,” and promotes racist pseudoscience that he uses to argue for eugenics.

Tanton doesn’t beat around the bush of his utopian vision. He once said: “I’ve come to the point of view that for European-American society and culture to persist requires a European-American majority, and a clear one at that.”

The rally, of course, reflected its organizer’s views. Ken Crow, head of the Tea Party Community group, spoke and made this case about “breeding”:

CROW: From those incredible blood lines of Thomas Jefferson and George Washington and John Smith. And all these great Americans, Martin Luther King. These great Americans who built this country. You came from them. And the unique thing about being from that part of the world, when you learn about breeding, you learn that you cannot breed Secretariat to a donkey and expect to win the Kentucky Derby. You guys have incredible DNA and don’t forget it.

As The Nation‘s George Zornick notes, Crow’s MLK addendum does little to hide the implication of this view. “At minimum, Crow was making a crude nativist argument that people from other cultures have the heritage of a donkey, compared to our race-horse DNA,” Zornick writes. “…There’s no reason for reporters not to clearly explain what these speakers were saying, and be honest about why they oppose immigration reform.”

Ted Cruz is going to the same events which give comfort to racists. And it works seamlessly because he’s peddling a view – that no “illegal” immigrants deserve “amnesty” – perfectly in line with the worldview of racists. The miasma of Cruz’s tirades against commonsense immigration reform has earned him a spot as the anti-Rubio of the GOP, and it has seated him alongside the Tom Tancredos, Michele Bachmanns, and Duncan Hunters of the world at the crazy table.

It’s not a good place to be (or to run for president from – each of those people lost in the GOP primary). Cruz is already attracting protesters in the early primary states he’s touring, disgusted with his anti-immigrant views. Cruz may not believe it, but most Americans wouldn’t go anywhere near a rally like that, even if it hadn’t been organized by racists. A significant majority of us support immigration reform. And an even more significant majority of us won’t like it when we find out about Cruz’s bedfellows.