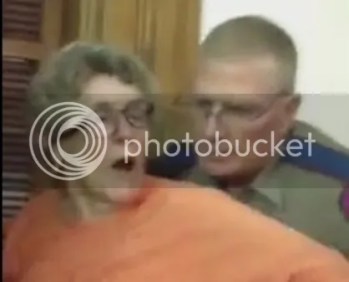 According to documents provided by Travis County, Martha Northington the 74 year old woman arrested in the Texas Senate gallery after Wendy Davis' filibuster was cut short was formally charged with “assault by contact” and “resisting arrest”. This was after charges of felony assault were reduced by presiding magistrate. If convicted of the original charge of felony “assault on an officer”, which is the standard charge for assault on a uniformed officer, Ms. Northington would have, at least temporarily, lost her right to vote. The irony in this is self evident.

Regarding her “resisting arrest” charge, it appears from the video that she was in fact picking up her items to leave when the officer first grabs Martha and you can hear her say, “you are hurting me”. According to the Probable Cause Affidavit the officer said,

Read the Affidavit filled by the officer and the statement from Ms. Northington's attorney below the jump…

“She attempted to resist by grabbing the chair, not standing, and pulling back from me. We broke her hold of the chair and got her up and as I escorted her up the gallery steps Trooper Hall released her. I was escorting her by the arm up the steps by myself and she continued to try and pull away from me. At the top of the stairs, she spun and slapped my face with her open hand and told me to let her go. The intentional slap to the face by Northington was offensive and I was currently wearing a State Trooper uniform…At this point i spun her around and proceeded to handcuff her for the assault. While trying to handcuff her she continued to resist by pulling her arms and attempted to twist away from me…Ms. Northington was transported to Travis County SO without further incident…

This offense was committed against the peace and dignity of The State of Texas.”

So after speculating that the actual assault might have taken place after the video the Affidavit claims the assault took place at the top of the gallery steps. Emotions were high all around and yes she was asked to leave but there is a continuing theme here — men asking women to be compliant while their rights are being violated. The point is, this arrest never needed to happen in the first place. While being pulled out of her seat and up the steps by one arm its hard to imagine she could have moved much faster. Even after she was cuffed you can hear her say, “shop pushing, I'll walk.” The statement from her attorney Samy Khalil seems to echo these sentiments:

“Martha Northington was expressing her rights as a citizen to participate in and witness the democratic process in action. For doing so, she was shown the door with unwarranted and unnecessary force. What happened to her was wrong, and we anticipate that the courts will treat her more fairly than law enforcement did on that particular night.”

These unfortunate events highlight the aggressive and intimidating way in which the Senate gallery was cleared, as well as the process by which votes were being taken on the floor when “citizens filibuster” began. This was not the “decorum” expressed by every or even most troopers that night but it is unacceptable nonetheless. In an email response to the Texas Tribune a DPS spokesperson wrote, “It's unfortunate that some find it is easy to pass judgment on the officers who are risking their lives everyday to protect and serve Texas.” The statement broadly addresses the dangers law enforcement have to face on the job, to which most people can sympathize, however, it is quite dismissive when referring to a 74 year old woman in peaceful protest.  We can only hope that Martha will be fully exonerated and her public record cleared of any offence. Oh, and an apology would be nice.

You can judge for yourself by comparing the Affidavit filed by the officer to the video below. Special thanks to my Attorney and friend Karen Gross for her professional help on this important story! 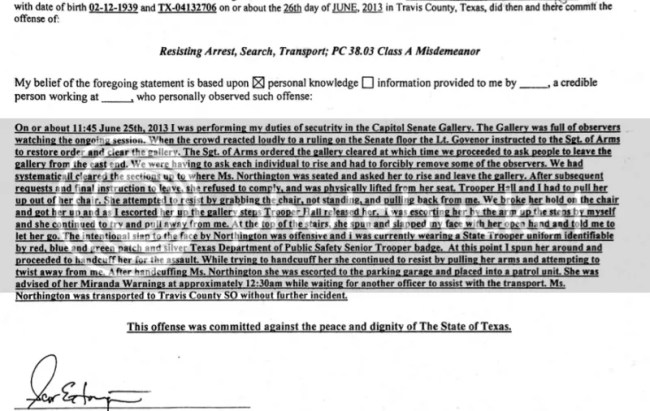