UPDATE: This story is developing and has been updated: Statement from Martha Northington's Atty & The Officer Affidavit On Her Arrest In Senate Chamber

CORRECTION: It was originally reported that Martha Northington was 72, she is 74. 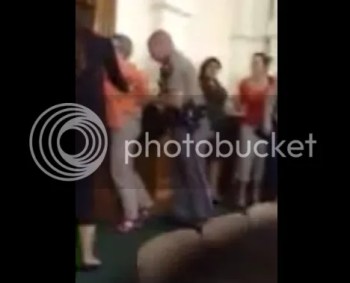 A 72 year old woman, Martha Northington, was arrested in the Texas Senate gallery, booked at the Travis County jail, and charged with at least one felony — assaulting an officer — as well as resisting arrest.

A records request has been sent to the Travis County jail where she was booked early Wednesday morning. The incident took place during the sit-in while Senator Wendy Davis filibustered the anti-abortion bill SB 5. State troopers were sent in by the dozens while the gallery was in uproar over what they believed was an overreach by Senators who hell bent on ending the filibuster and taking a vote before the 12am deadline.

An eyewitness in the booking room says that though she was originally charged with at least one felony, they were later reduced.

The witness said the officer appeared to be unsure what he was willing to actually charge her with and had trouble filing his report.

Watch the video below the jump.  From the video, shot by Elizabeth Willmann, it is clear Martha neither resisted arrest or assaulted an officer. You can then hear her shout, “You're hurting me” as she appeared ready to stand as the arresting DPS officer grabbed her arm and lifted her out of her seat. After being dragged up the stairs she was then shoved into the gallery wall and handcuffed. The crowd immediately reacted and begun yelling at the officers to let her go but you can still hear her say, “I will walk.”  But by then it was too late on this night. Fortunately I can report she is out of jail.

Dewhurst had already issued felony arrest threats to the gallery if they did not “respect decorum of the Senate.” It's clear that only the Senate is allowed to suspend their own rules.

As Senator Wendy Davis told MSNBC's Chris Hayes, “They [Senate Republicans] have over-ridden and made a mockery of all of the rules we run by in this state…What we saw yesterday was injury to that insult where Senate rules became meaningless.”

Texas Republicans pushing this bill claimed it was about “protecting women” but it was the same men who sent in a drove of DPS officers to clear the Senate gallery of women who weren't going to let their rights be taken away quietly. These are the same men who now are trying to equate these women to terrorist or occupy protesters. This display of civil disobedience is no different than the student sit-ins that ultimately led to major advances in civil rights for minorities in the early 1960s.

Now Texans must endure further posturing of the legislature as Gov. Perry has called a 2nd special session putting the abortion issue back on the call.

The problem as Paul Begala pointed at a Battleground Texas fundraiser is that “Texas isn't a red state, it's a non-voting state.”

Maybe we just needed something to wake us up.