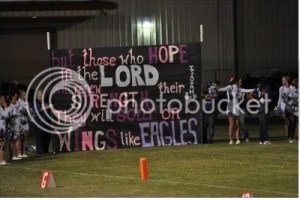 The saga continues in Kountze, Texas over cheerleaders using religious scripture on football banners. Governor Rick Perry and Texas Attorney General Greg Abbott say they support freedom of all religion but their actions show their intent is to establish a defacto Christian government claiming there's a “moral basis for the legal code” outlined in the Ten Commandments. The truth is as more nonpartisan groups review the facts in this case its increasingly beginning to look like the cheerleaders are being exploited for political gain. The KISD legal council and Texas Association of School Boards have backed the Freedom From Religion Foundation in their opposition to the banners, and now the Anti-Defamation League and Jim Walsh managing editor of the Texas School Administrators Legal Digest have also joined their ranks. In his letter Walsh pointed out that the superintendent made the right call the first time. He made the distinction between a place kicker making the sign of the cross and “words placed on a banner, held by cheerleaders in school uniforms,” It was reference to a comment by Greg Abbott that sought to equate the two in defense of the students' activities as individual religious expression. Walsh continued regarding the superintendent:

He sought legal advice. Then he followed it. The legal advice he got was right on the money.  It took courage and integrity for Superintendent Weldon to act on that advice—courage that neither Governor Perry nor Attorney General Abbott have displayed. They chose to play politics when they should have provided leadership.  Leadership involves respecting the law of the land whether you agree with it or not.

The two state officials held a joint press conference in which they tried to out do each in other in their show of support for the cheerleaders and their disdain for atheists. Perry broadly referred to atheists as a “very vocal and litigious minority” who are hell bent on silencing religious expression. In an impressive feat of double speak the Governor said, “We're a nation thats build on the concept of free expression of ideas…and the concept that the original law is God's law outlined in the Ten Commandments.” Perry then went on to thank AG Abbott and his staff for “efforts to support and liberate the people of our state to be able to worship.” Abbott for his part upped the anti-atheist rhetoric saying:

We will not allow atheist groups from outside the state of Texas to come in to the state, to use menacing and misleading intimidation tactics to try and bully schools to bow down at the alter of secular beliefs. 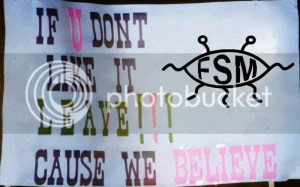 Catch his religious metaphor “alter of secular beliefs” to describe atheists' agenda? He gave several examples of his office defending religious liberty that all involved a Christian complainant. Its a shame to see two of our top state officials exploiting young cheerleaders who are not constitutional scholars but rely on adults and authority figures for guidance. Now they are being taught they are victims. The result has been stories of intolerance including median signs that read, “If you don't like it leave, we believe”. Some community observers worked up the gumption to bring banners to the stands showing support for the separation of church and state, and were told by a football player's parent that they dare not hold the sign up when he son crossed the field. They reported the incident to a nearby police officer who spoke to the parent. Apparently that resolved the issue and the parent apologized. But, to the point, should that be necessary and are their others who remain silent for fear of retribution? And are we experiencing real leadership on this issue or is this simply being used as a pandering opportunity? One group that understands true religious intolerance is the Anti-Defamation League. ADL was started to end the defamation of Jewish people in 1913 but the organization now fights on behalf of civil rights for all. This is where the Governor and AG should take note. In a recent statement ADL called support for the cheerleaders activities, “misguided”, “highly problematic”, and in violation of the Establishment Clause. In a letter sent to Abbott prior to the decision they argue that the school cheerleading squad qualifies as “school-sponsored activity” giving the district the right to prohibit the banners. Addressing the Governor and AG's confusion between tolerance and establishment ADL wrote,

Our perspective in no way reflects hostility toward religion. Rather, it is based on a profound respect for religious freedom and an appreciation of the extraordinary diversity of religions represented by the students in our public schools.

With such staunch support for Israel on the campaign trail by Perry and his Party, it's a wonder he and the Attorney General can't show more respect for religious minorities in their own state.