Update 2:45pm Thursday: Supporters of the Superintendent's decision have started their own effort on facebook. They have shared letters of support to the district representatives. 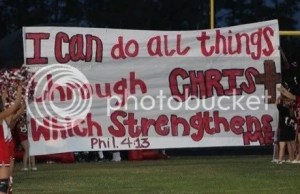 Hidden behind the pine curtain, a small East Texas town has erupted into a frenzy after school officials banned religious banners held by cheerleaders during high school football games. Kountze ISD Superintendent Kevin Weldon told the students to cease the practice after he received advice from his legal council to comply with an anonymous complaint. Texas law allows religious banners and signs at school functions as long as they are made by students and were not encouraged by faculty or school officials. The KISD restriction only applies to the on field display of signs by uniformed representatives of the school, but the cheerleaders, football players, town of 2,100 and 30,000+ Facebook groupies have taken it as a full assault on their religious freedom of speech.

Right on cue Governor Rick Perry spoke of “spiritual warfare” to group of Christian Conservatives Tuesday saying, “The American family is under seige, traditional values are somehow exclusionary, a simple prayer in our public schools is the basis for these secular attacks,”

The idea that we should be sent to the sidelines, I will suggest to you is very driven by those who are not truthful. Satan runs across with world with his doubts and untruths. One of those truths is that people of faith should not be involved in the public arena.

Parents of the cheerleaders have tapped Beaumont attorney David Starnes to help them explore their legal options. “I think these are biblical verses that are good. They simply wanted to bring a positive message rather than an angry or competitive message,” Starnes said. The case has caught the attention of the Liberty Institute, a national organization dedicated to “religious freedom” in America. Michael Johnson a spokesperson for the Liberty Institute claims the cheerleaders are in the right because supplies they used were not provided by the school district and they have won 99% of similar cases over the last 15 years.

The students also received strong words of support from former Congressman Steve Stockman (and current Republican Congressional candidate) who warned the Superintendent saying, “this is East Texas, not San Francisco. The superintendent can either overturn his ban on religion, or pack his bags.” He managed not to choke on the irony when he continued, “Congress' job is to protect citizens from abuse by government officials. If school administrators will not repeal the ban, we will repeal the administrators.”

It may be helpful to understand that this decision was not made by the Superintendent but the Supreme Court based on a case from…you guessed it, Texas. This story will continue to develop as the students resolve continues to harden and more supporters plan to rally at the next home game. For his own part Superintendent Kevin Weldon is standing by his decision saying, “I commend them for what they stand for. But I called legal counsel and even though it's lead by students, it should not be allowed to go on.”