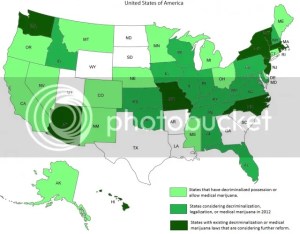 The Texas Democratic Party recently rolled out a press release highlighting their support of decriminalizing marijuana citing the “failed policy” of the drug war as fiscally and morally irresponsible. The Party suggests that Texas could save as much as $75 million every year by ending prohibition. There are about 750,000 arrests each year for possession alone across the United States but Texas now boasts the nations largest prison population recently eclipsing California.

Archaic laws that incarcerate thousands of Texans – disproportionately African Americans and Latinos – for the possession of marijuana must be changed. These arrests do nothing to promote public safety or fiscal responsibility. Instead they crowd our jails, ruin the futures of thousands of young Texans, and are a drain on our state budget.

This is the same argument made by Chicago Mayor Rahm Emanuel and New York Gov. Andrew Cuomo when they both proposed reducing the penalty for possession earlier this year. A similar measure in New York City is being supported by Republican Mayor Mike Bloomberg after a study of NYPD's “stop and frisk” program found that “more than half of those arrested [were]younger than 25 and 82 percent either black or Hispanic.”According to the CDC, 2011 marked the 1st year more young people smoke pot than tobacco giving hope to some that Obama might use the issue to reignite his support among Millennials. Those who have been following these developments may not be as hopeful of an Obama 'October surprise' involving an evolution of federal policy towards the use of cannabis. Speaking to Jimmy Fallon the President said, “We're not going to have legalized weed anytime soon”. Obama's administration has also continued the raid on large scale medical marijuana dispensaries in the 17 states that have laws approving its use. In the President's latest interview with Rolling Stone he articulated the nuance of his administration's enforcement by saying,

I can’t ask the Justice Department to say, ‘Ignore completely a federal law that’s on the books.  What I can say is, ‘Use your prosecutorial discretion and properly prioritize your resources to go after things that are really doing folks damage. As a consequence there haven’t been prosecutions of users of marijuana for medical purposes.

Recently the top DEA official would not even admit marijuana was less harmful than heroin, saying the question was “subjective”. Still, anti-prohibition sentiment seems to be growing across the nation as voters in several battleground states will see referendums at the poll in November. In 2004, Karl Rove attempted to use Bush's campaign and ballot initiatives banning gay marriage to rally conservatives to the polls but there does not seem to be a connection between the pro-marijuana organizers of these initiatives and the Obama campaign. Gallup reports that national support for legalization is at 50% up from 46% just two years ago, and 25% in the mid-90s but whats likely to be more influential with the presidential campaigns are whats happening in swing states. Here's a run down of what voters in battleground states will likely see on the November ballot regarding marijuana:

Colorado: Amendment 64 would provide full legalization of use and cultivation of marijuana and industrial hemp. The latest poll by Rassmussen show support at 61% of likely voters.

Michigan: Detroit will vote in August on whether to allow adults over 21 to legally buy, sell and grow pot. A state wide effort seeks to do the same but is running far short of the 323,000 signatures required.

Missouri: A statewide effort failed to get the 144,000 signatures needed to reach the ballot. Efforts to reduce enforcement priorities at the municipal level in Kansas City are still moving forward.

North Carolina: State Democratic Party similarly changed their platform to call for decriminalization. Charlotte, North Carolina will host the Democratic National Conventino this year where Obama will be officially nominated for President.

Washington: Initiative 502 would tax and regulate marijuana. PPP poll suggests it has 50% support with 37% opposed.