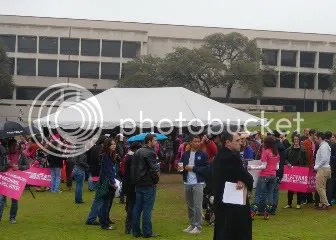 About 200 people braved the rain in Austin today to support Planned Parenthood and affordable access to birth control for all women. The keynote speaker was Cecile Richards, current president of the Planned Parenthood For America Federation, former staffer to Nancy Pelosi, and daughter of former Texas Governor, Ann Richards. There were also about 20 anti-choice activists in attendance as well.

Richards spoke about the urgent need to support all women’s access to medical care given the current madness sweeping the Republican primary.  She said, “somehow in this country, in 2012, this election might turn on whether women should have access to birth control.”

She also told of a recent phone conversation she had with President Obama who told her “all women should have access to birth control without expensive co-pays,” and that birth control is “an issue of health care and economics for women.”

Richards closed her rousing talk saying, “it is time that the people who actually use birth control are heard in Congress.  We’ve got to speak up.  We’ve got to educate other people. We’ve got to vote.  This is the time to take action.”

Other speakers included Terri Givens, a University of Texas professor who was diagnosed with endometriosis in her 20’s and would have lost the ability to have children without having her hormones regulated by oral contraceptives.  Despite her very real disease, her health insurance provider initially turned her down for coverage of the medication.  With the help of birth control, in fact, she was eventually able to become a mother to two boys.  She concluded her statements with a nod to her career at the LBJ School of Public Affairs saying, “study after study has shown that being able to control one’s own fertility directly leads to economic and political success.”

Speaking about the notorious House of Representatives hearing on birth control, Alexander warned, “those few men that were testifying on Capitol Hill have the power to affect a whole lot of us.”  In the same vein, Limon-Mercado added, “unlike Congress, I’m glad we have some women here today.”

Massey spoke of the increasingly hostile political climate.  “The religious right’s agenda threatens access to contraception,” she said.  “This is a war on birth control. A war on women.”

Finally, there is a great post from Garry Willis of the New York Review Of Books you should read that eviscerates the “religious freedom” argument against access to contraception (hint: the Catholic Church’s opposition to birth control stems from a single edict written by Pope Pius XI in 1930.  Yes, he’s the same Pius XI that maintained friendly relations with Hitler and the Japanese Empire.  Great guy).  Highly recommended.