Well, one more has emerged an email that got turned over last week as part of the preclearance litigation in Washington – and it's a doozy.

No, not the fishing supply shop used by noodlers.  OHRVS stands for 'Optimal Hispanic Republican Voter Strength,' and it's a measure devised by Republicans to calculate how simultaneously Hispanic and Republican they could make a district.

As explained in the email from Eric Opiela, counsel for the GOP congressional delegation, to mapdrawer Gerardo Interiano, the goal of the exercise was to “pull the district's Total Hispanic Pop and Hispanic CVAPs [citizen voting age population]up to majority status, but leave the Spanish Surname RV [registered voters]and TO [turnout]the lowest.”

In other words:  Mapdrawers were told – we want you to create districts that look Hispanic on paper but have a much lower chance for Hispanics to elect their candidate of choice.

Opiela, who is also a member of the State Republican Executive Committee, explained in the email, this would be “especially valuable in shoring up [freshmen GOP congressmen]Canseco and Farenthold.”

Minority groups, not surprisingly, have reacted strongly to the email, saying that it proves that Texas Republicans intended to discriminate against Hispanics by diminishing their voting strength through clever manipulation of numbers.

They also are questioning why the email was not disclosed as part of proceedings in San Antonio, but only last week.

It isn't the first time one of Opiela's emails has generated controversy.  Last fall, a lot of eyes were on an email from Opiela entitled 'Lying with Numbers,' which talked about ways to measure racially polarized voting.  He explained at the time that the email simply reflected notes from a seminar he attended.  But with this most recent email, it looks like the title may have been an accurate statement of what Texas Republicans were trying to do with the maps they drew.

The full email follows below, but we'll let the Texas Democratic Party spokesperson Rebecca Acuña have the final word with her short but sweet summation of the situation:

“Republicans would rather draw Latinos out of their districts than work to earn their vote.” 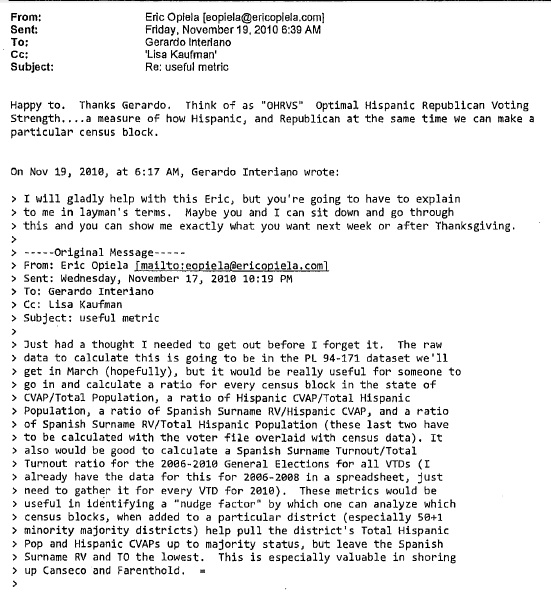